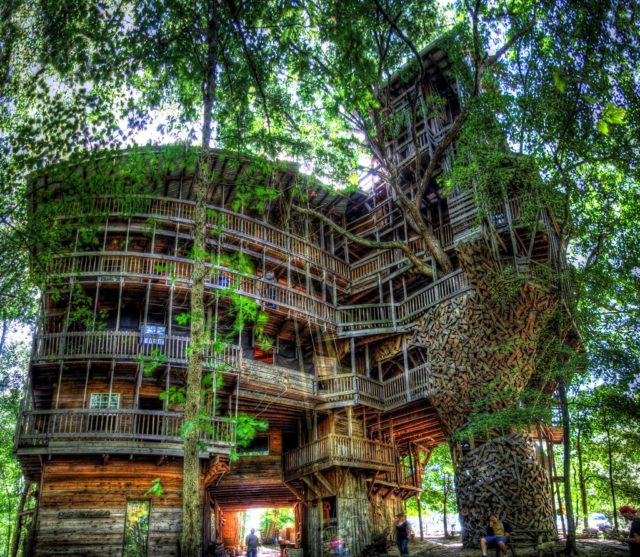 The next piece of home design is truly mind-blowing. When you first mention a tree-house to someone, they expect you present a small structure not a four-level high jaw-dropping structure. The awesome tree-house featured here took almost 11 years to complete. Located in Tennessee, US, it is supported by 6 oak trees and a quarter of a million nails were supposedly used to build it. The owner, Horace Burgess, managed to create 3,000 square meters of living space. Even going through all the rooms of the gargantuan tree-house is an adventure in itself. But you won’t get bored in this tree-house quickly. It has an incredible swing, a basketball hoop, and it also features a church bell, weighing almost half a ton! The impressive structure is quite dangerous because there are concerns it can catch very easily on fire, and being so large, it could have disastrous effects. This treehouse is incredible!

Horace, who lived in the 10-story wooden house, said he begun to build in 1993 after he received a vision from God, who said he would never run out of materials if he built it.
The enormous tree house is a whopping 10,000 square feet but only cost Horace $12,000 thanks to his thrifty use of recycled materials.

The tree house in Crossville Tennessee, the tallest in the world and took 11 years for builder Horace Burgess to finish

Hard work: The entire house took more than 268,000 nails to build – and a lot of elbow grease