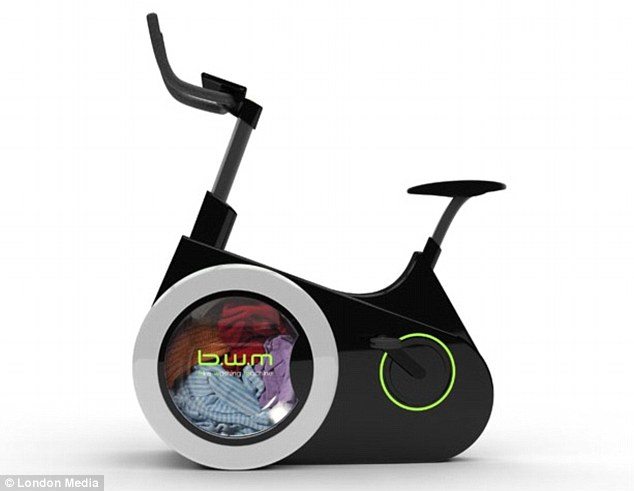 Sometimes is hard to find time to exercise because of housework, but this piece of gym equipment gives you the opportunity to do two things at once: wash your laundry and get fit. This bike was developed by Chinese designers and it incorporates a washing machine within its front wheel, thus also saving space. When you start pedaling, it makes the drum to rotate, just like a conventional washing machine. However, the designers failed to mention if the bike will automatically fill and drain with water.

The bike includes a generator which produces electricity that you can store for later, therefore being cost-effective. Its generator could become a reliable supply of energy if you live in an area without access to it.

At the Dalian Nationalities University, students are building a prototype of this bike. They said: Riding a bike is a popular exercise, but washing laundry is something that you might do on daily basis or at least once a week, unless you keep buying new clothes and underwear, so why not combine them into a single useful equipment/appliance?

A similar device was developed in 2011 by Richard Hewitt, a design student at Sheffield Hallam University.

Jog and wash at the same time!

If this device didn’t convince you, maybe one that combines a treadmill with a washing machine will do that.
This hamster wheel looking machine features a series of wash tubs enclosed within a large rotating wheel, which also generates electricity. A South Korean designer, named Si Hyeong Ryu, proposed this concept for the 2014 Electrolux Design Lab competition.