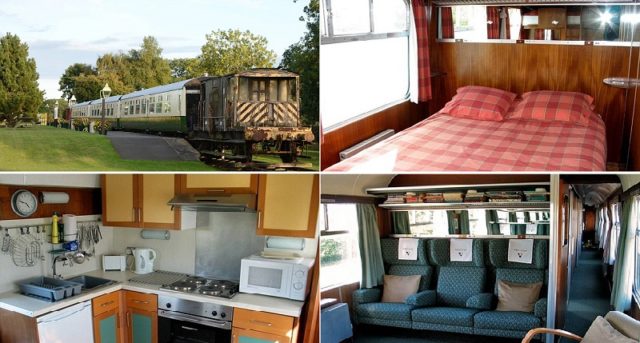 Transforming unusual structures into neat homes is a really creative endeavor. The example set by this couple in North Yorkshire can be multiplied all over the world. Railway carriages almost half a century old turned into superb holiday homes are an inspiration. Carol and Mark Benson had a great idea and turned it into a sustainable business model. Vintage lovers and train enthusiasts will definitely like to spend a few days in one of these guest homes. As you can see from the video provided, some original elements of the carriages were splendidly mixed with modern furniture and appliances. Take a virtual tour and imagine how it will feel like to spend a vacation in a train! Scroll down for video.

The Old Station in Allerston, North Yorkshire, which used to be a working railway station has been converted into a family home and guest house.

The station welcomes people of all ages, with children arriving during school holidays and retired people throughout the year

The business is owned by Carol Benson, pictured, and husband Mark

The 45-year-old carriages were First Class – they now offer a kitchen, sitting room, and two or three bedrooms

One of the main bedrooms at The Old Station

Another First Class sitting room with books, mirrors and comfy chairs as well as the long corridor

‘When they go to the toilet the light comes on it the carriageway saying ‘engaged’.

‘We really put a lot of attention into detail. The communication cord is still there. If somebody pulls it I come round and collect £50 – that’s the threat anyway!’

Carol and husband Mark, 55, who still has a day job as a surveyor for Network Rail, made the railway station itself their home.

‘It’s just as it was when it was a working station,’ she said.

‘We step out the door onto the platform and the carriages are situated as if they are pulling into the station – but they don’t move.’

Co-owner Carol, 54, mother-of-two, said when she first saw the station: ‘We were looking to set up a lodgings business in the area and I liked the station immediately’

Looking to set up a lodgings business in the area Carol told her husband: ‘I want to buy this. It’s very sad and run down’