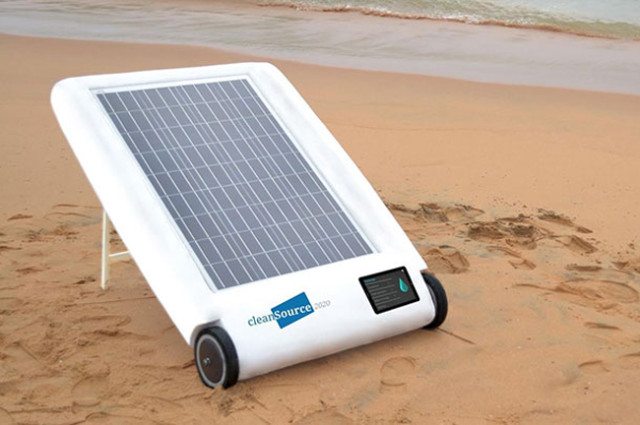 The British Company has invented a machine called Desolenator which can transform salt water and other un-potable water sources into pure, distilled water, suitable for human consumption. The clean water crisis influenced the company in developing a solution in order to provide this vital source to people. Turning ocean-water into potable drinking water has never been easier.

This invention manages to generate 15 liters of potable water per day without requiring a conventional power supply, just the sun. Furthermore, another great aspect is that this machine doesn’t need an extra investment or consumables in time, and it provides a household with clean water for up to 20 years.

“Climate change and population growth are setting the stage for a global water crisis,”states Desolenator CEO, William Janssen in a press release. “A massive 97 percent of the world’s water is salt water and our plan to tap into this valuable and available resource to disrupt the global water crisis in an unprecedented way. The process is called desalination and today whilst 0.7 percent of the world’s water comes from desalination, existing technology is expensive, inefficient and disproportionally drains 0.5% of the world’s global energy supply. Desolenator is different from existing desalination and home water technologies. It harnesses solar power in an elegant way, maximizing the amount of solar radiation that hits the technologies surface area through a combination of thermal, electrical and heat exchange . . .”

Although Desolenator is still a prototype, this invention has already been awarded the second place at the Climate-KIC Accelerator program. The grant that the company won is being used to further develop this product. Moreover, a crowd funding campaign has been organized to support it, the funding goal being $150,000. Until now, a quarter of this has been raised. Bringing clean water to the world is now possible!