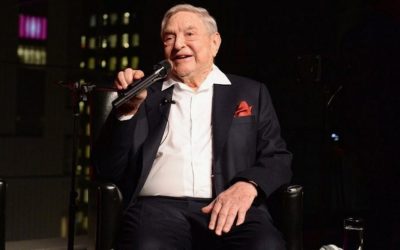 While George Soros-backed Transparency International maintains that America is getting more corrupt, the organization itself has a history of scandals. (Photo Credit: Andrew Toth/Getty Images for Physicians for Human Rights/AFP)

A “respected” German think tank is now asserting that America is getting more corrupt and less free because of President Trump.

However, America still receives a high score for being free of corruption in the CPI. Particularly, the United States’ score is 71 while the average European Union nation’s score is 66.

Just How Corrupt Do They Say America Is Becoming?

Although the CPI indicates that America is getting more corrupt, the U.S. is still ostensibly less corrupt than most countries.

Currently, the CPI ranks the USA as the world’s 22nd least corrupt nation with a score of 71. Nevertheless, that score fell from 75 in 2017. Furthermore, the United States is now more corrupt on the scale than France, which has a score of 72.

Conversely, the average country in the Americas region has a CPI score of 44. As a result, even Transparency International considers the United States to be far less corrupt than most of its neighbors.

For example, it cites “a rise in public promises for simplistic and ‘strong hand’ approaches to solving deep-rooted and complex societal problems, including corruption.” So, Transparency International claims that Trump mantras like “drain the swamp” somehow lead to corruption.

Nonetheless, Transparency International offers no evidence to support these claims. Nor does the organization provide any proof that Trump is participating in the “undermining of free and independent media, especially when coverage challenges leaders’ messaging.”

Transparency International also notes “an increase in conflicts of interest and private influence.” This refers to the fact that Trump’s son-in-law, Jared Kushner, is a senior advisor to the president.

On the other hand, some of Transparency International’s claims like “interference with or blunt use of national institutions to weaken the system of checks and balances and increase executive power,” are hard to even believe. Consequently, the organization seems more interested in demonizing Trump than exposing corruption.

What Is Transparency International?

While Transparency International maintains that America is getting more corrupt, the organization itself has a history of scandals.

For instance, the organization admits accepting $3 million from the German technology giant Siemens in 2015. Notably, Siemens paid $1.34 billion in fines to the U.S. Justice Department in 2008.

Additionally, the Justice Department has accused Siemens of bribing government officials in numerous countries. Wikipedia further alleges that Transparency International violated its own due diligence procedures by accepting the money from Siemens.

Additionally, Transparency International receives much of its funding from various governments.

In fact, the Transparency International website lists the United States State Department as a source of funding. As a consequence, the organization stating that America is getting more corrupt receives your tax dollars.

In addition, several German government agencies including the Federal Foreign Office, the Federal Ministry For Economics, and the German Agency For International Development fund the group. Coincidently, Transparency International’s headquarters is in the German capital of Berlin.

Transparency International Gets Money From George Soros And Big Coal

You may also enjoy reading an additional Off The Grid News article: As The 2020 Presidential Race Heats Up, Will Elizabeth Warren Stay In?

What are your thoughts on George Soros think tanks and alleged American corruption? Let us know in the comments below.

The post Soros’ Propaganda Machine Now Claiming America Is Getting More Corrupt? appeared first on Off The Grid News.