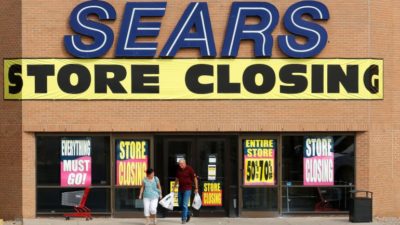 The Sears bankruptcy shows America could no longer be a middle-class country. Sears has been the store for America’s middle-class for many years.

The Sears bankruptcy shows America could no longer be a middle-class country. Sears has been the store for America’s middle-class for many years.

In its heyday, Sears sold everything needed for the middle-class lifestyle. In particular, Sears sold houses, appliances, clothes, electronics, furnishings, lawnmowers, insurance, tools, and even cars at various times.

Sears became America’s largest retailer by selling bland, average-priced goods to the middle-class. Nonetheless, the Sears bankruptcy comes at a time when the middle-class is shrinking.

The Sears Bankruptcy Could Kill 68,000 Jobs

Management will try to keep Sears open by closing 142 unprofitable stores. The company operates 570 Sears and 360 Kmart stores across America. Nevertheless, Sears operated 2,205 Sears and 1,305 Kmart stores as recently as 2012.

Sears will operate 400 stores if a reorganization plan that management is proposing ends up working. The Sears bankruptcy will only work if unpaid creditors go along with the plan. In addition, Sears will need a $300 million loan from the ESL Investments hedge fund to stay in business.

Sears stock was trading at 62¢ a share on Wednesday and analysts estimate that Sears still employs 68,000 people nationwide.

In the first place, Sears was a watch company. In fact, Richard Sears began by selling watches in 1886 in Minneapolis.

Sears became America’s most famous catalog after moving to Chicago. Sears’ most interesting product consisted of 70,000 to 75,000 house kits sold between 1908 and 1940. To clarify, the kit was a complete house that you ordered and built. There are reportedly 447 house designs from the Sears catalog.

The longest Sears catalog is over 1,000 pages long, but Sears stopped printing their catalog in 1993. Generations of Americans know the Sears catalog as the “wish book.”

The wish book helped African Americans fight segregation and enter the middle-class. All in all, the Sears catalog gave Southern blacks an alternative to segregated stores. For example, African Americans could order guns and other items that racist storekeepers refused to sell them from Sears.

Sears waited until 1924, 28 years after its founding, to open its first retail store in Chicago. The company became America’s largest retailer during the Great Depression, as the number of Sears’ stores doubled during the 1930s.

Sears’ failures include two attempts at retailing automobiles. A “Sears Motor Buggy” appears in the catalogs published between 1908 and 1912. In addition, Sears sold the Allstate car through its stores in the early 1950s.

Sears also built the Sears Tower in 1973, which was the world’s tallest building at the time. Tellingly, Sears abandoned the Tower to creditors in 1994.

How A Hedge Fund Caused The Sears Bankruptcy

The path to the Sears bankruptcy began in 2005 with hedge fund operator Edward S. Lampert buying control of the company.

In general, Lampert has tried to compete with Walmart by merging Sears and Kmart together. Yet, critics accuse Lampert and his hedge fund, ESL Investments, of looting Sears. Lampert is currently transferring large amounts of Sears’ real estate to his Seritage real estate investment trust.

Fortune estimates that Lampert is worth $1 billion. However, nobody knows what will happen to Sears’ 68,000 employees or its 100,000 retirees. Moreover, the fate of America’s middle-class remains uncertain.

You may also enjoy reading an additional Off The Grid News article: The Average American’s Income Is Falling

Do you have any thoughts on the Sears bankruptcy and how it relates to the middle-class? Let us know in the comments below.

The post Sears Bankruptcy Shows America Is No Longer Middle-Class appeared first on Off The Grid News.