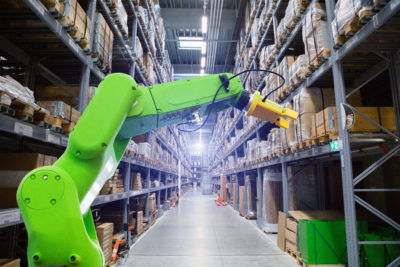 As the robot revolution takes away more and more working-class jobs, could it lead to political unrest and riots?

The ongoing robot revolution will kill many jobs forever. In fact, some experts are afraid robots, autonomous machines, and artificial intelligence will kill all jobs.

For example, Futurism writer Dan Robitzski fears an “economic robot revolution” in which automation kills all jobs. This would leave most people without a way to make money.

Specifically, Morris predicts a future in which people will have one role in the economy: customers. However, Morris does not know where future customers will get money from.

The Robots Are Coming For Your Jobs

Unfortunately, the robot revolution, or technological unemployment, is happening now. In fact, robots are already killing jobs at Walmart.

For example, Walmart plans to deploy robot janitors at 1,500 of its stores, Futurism claims. In addition, Walmart will use robot stock clerks at 300 stores.

Notably, the robots are already telling Walmart employees what to do. To explain, the floor-scrubbing robot sends messages about messes it cannot handle to human employees, Futurism reports.

Additionally, Walmart is exploring the possibility of using Flippy the robot fry cook in its delis. To clarify, Flippy is a robot that cooks hamburgers, tater tots, and other fried foods. Notably, Flippy is already working at Dodger Stadium in Los Angeles and at the Caliburger fast-food joint in Pasadena.

Will The Robot Revolution Kill Jobs?

From this, we can see that corporations are already using robots to kill jobs. Moreover, robots are taking working-class jobs which could lead to political unrest and riots. This is because people who cannot find work could riot or engage in terrorism.

Robots are not the only job killers you need to fear. Oddly enough, apps are killing jobs at companies like Bank of America.

In fact, Bank of America CEO Brian T. Moynihan is bragging about his company’s ability to kill jobs to stock market analysts. Moynihan tells analysts his bank eliminated “more employees than Delta has I think” since he became CEO.

For the record, Bank of America employed 288,000 people when Moynihan became CEO in 2010. Notwithstanding, Bank of America had 204,000 employees as of October 2018. In comparison, Delta Airlines currently employs around 80,000 people.

Particularly, Moynihan brags that Bank of America is replacing employees with apps, robotic process automation, and ATMs. Software and ATMs are now doing the work formerly done by Bank of America employees. Significantly, you no longer need to go to the bank because you can deposit checks with an app.

Consequently, robots and technological unemployment will be major issues in the 2020 presidential campaign.

In particular, Yang wants America to pay every citizen a $1,000 a month Basic Income or Freedom Dividend. In detail, a basic income is an automatic cash payment every citizen receives from the government.

Yang thinks America needs a basic income because machines will kill many jobs. In addition, Yang does not believe the economy can create enough jobs for all the people technology is leaving jobless.

To elaborate, Yang will pay for his Freedom Dividend with a Value-Added Tax (VAT). Specifically, a VAT is a sales tax on most transactions in the country. VAT rates can be high, though, as the United Kingdom’s current VAT rate is 20%.

As a result, robots are now a political issue and they could increase your taxes.

The robot issue may not go away soon either because Andrew Yang is doing remarkably well in the Democratic presidential primary.

Moreover, Yang’s campaign is also taking in a lot of cash. CNN claims that Yang raised $1.7 million from 80,000 donors in the first three months of 2019. In particular, Yang claims to have received $250,000 in four days.

Strangely, Yang’s “viral popularity on social media feels reminiscent of the “meme army” that helped lift President Trump to victory in 2016,” Kevin Roose writes in The New York Times. So, Yang could potentially disrupt the Democrats the way that President Donald J. Trump shook up the Republican party.

You may also enjoy reading an additional Off The Grid News article: Students Who Share Gun Photos Get Suspended In Social Media Frenzy

Do you have any thoughts on the robot revolution? How many jobs do you think will be lost in America as a result of increased automation? Let us know in the comments below.

The post Robot Revolution: Is The American Workforce In Jeopardy? appeared first on Off The Grid News.