Papaya Ringspot Virus in the Garden – Control and Prevention 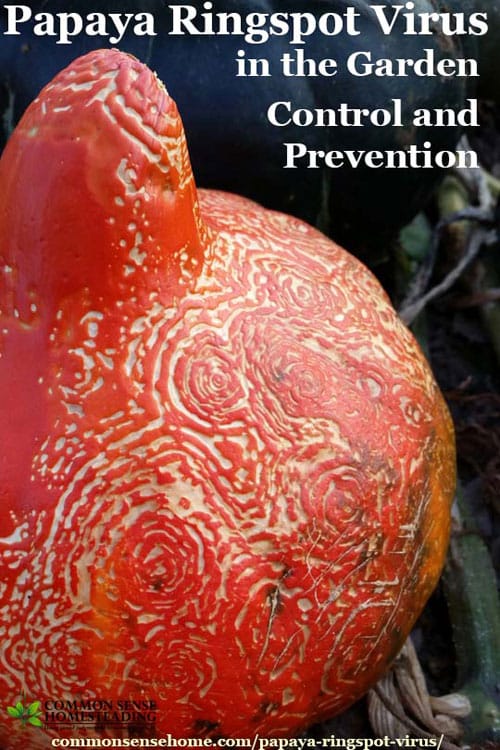 The spirit of Vincent Van Gogh visited my squash patch! Lest you think I have been sniffing the catnip, look at this squash! When we found this, we gazed at it in wonder. The intricate pattern is definitely not random. Did my artistic son sneak into the garden and prank me with this complex artwork? The vibrantly colored red Kuri squash looks as if someone took a teeny tiny woodburning tool and painstakingly etched a wonderful pattern just into the outer skin of the fruit, leaving the inner layer of the hull intact. When we found a second one, we knew this was not a prank. We posted a photo and a wise Common Sense Home reader told us that this was caused by a disease, the papaya ringspot virus, also known as papaya mosaic virus.

Say WHAT?! What is that and what is it doing in my Northeast Wisconsin garden? (We certainly don't have papayas nearby.) I had to do some research, which I'll share here with you.

PRSV (papaya ringspot virus) is a plant disease more commonly found in warmer climates on papayas. This disease decimated papaya production in the 90s. There are two types, PRSV-P and PRSV-W. It seems that the first affects papaya and cucurbits, while the latter only infects cucurbits– cucumber, melon, pumpkins, and squash. The virus, spread by aphids, causes symptoms in the plants within three weeks.

In papayas, young plants die quickly, while older, productive plants show yellow leaves which drop. The fruits have blemishes, and the compromised trees produce fewer and smaller fruits until they eventually die. Apparently, all infected trees die. The papaya growing industry was nearly wiped after the disease first appeared in Hawaii in 1992.

Unable to find any way to prevent the spread of infection, even by aggressively removing diseased trees (a practice that goes by the name of roguing), research turned to genetic modification. No resistance to the virus was found in the cultivated papaya trees, but resistance was found in wild cultivars of the Carica species. Unfortunately, these were sexually incompatible with the papaya producing plants.

By splicing genes from the wild species into the Carica papaya, an immune response to the PRSV was developed. The two transgenic papaya strains are called Rainbow and SunUp. These transgenic varieties now comprise a majority of cultivated papaya in Hawaii. Consumption of the fruits from the transgenic papayas have demonstrated no adverse effects in humans, but studies have been limited.

But what is PRSV doing in my squash patch? Despite my search, I have no idea how it got there. Apparently, the papaya ringspot virus type W was formerly called watermelon mosaic virus type 1 here in our growing areas. There are also a couple of other mosaic viruses that produce damage on our cucurbits.

Can I eat the damaged squash? Yes. The squash looks too beautiful to eat, BUT it is safe to consume.

Can other plants get this? PRSV Type W affects all cucurbits. This would be squash, pumpkins, watermelons, cucumbers, and gourds. Type P will infect papayas as well.

Should I collect all my cucurbit vines to destroy the virus? That is not necessary. The disease is spread by aphids in a non-persistent manner. It does not spread from plant to plant directly.

Can I still save the seeds? Yes, the virus lives in aphids, not in the plant material. 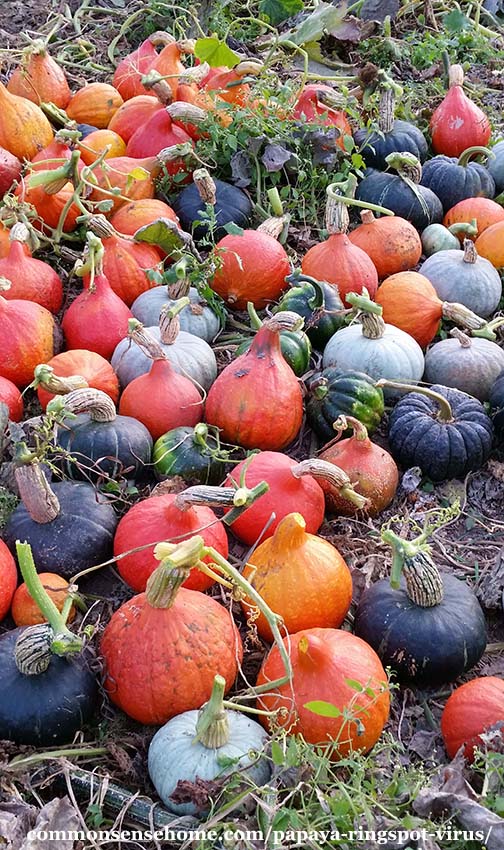 Part of our 2017 squash harvest. Out of dozens of fruits, only a few were visibly affected.

What can gardeners do to prevent future problems? Control the aphids! There are a number of ways to control aphids, including;:

The first solutions will also affect beneficial insects. I prefer to concentrate on growing healthy plants with enough diversity of plant material to provide a balanced environment for our insect friends.

Overall, I did not have any significant plant loss or fruit damage, so we're not seriously concerned. Next year we'll keep a closer watch on the weeds, and focus on plant health and a balanced ecosystem with predatory insects.

You may also enjoy other posts listed on the Gardening page, including:

How to Start a Garden – 10 Steps to Gardening for Beginners

The Ultimate Guide to Natural Pest Control in the Garden 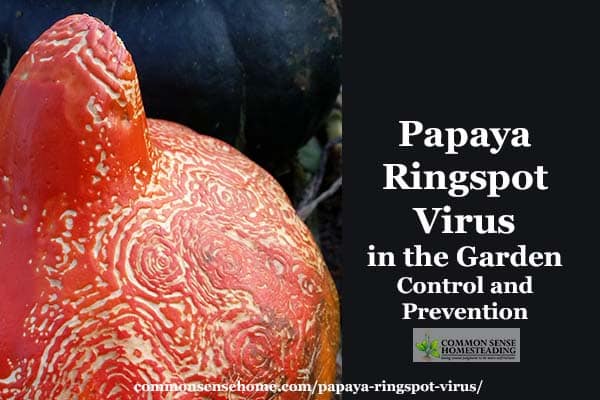 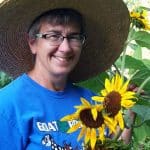 This post is by Debra Ahrens. Debra lives with her family on a five acre hobby farm in northeastern Wisconsin which she often describes as ‘short on hobby, long on farm'. Besides the School of Hard Knocks (Life), she attended UW-River Falls, majoring in Dairy Science. Along with her husband Jerry and their three youngest daughters, they raise every kind of domestic poultry known to man, and maybe a few that shouldn't be known. Their furry animal family includes a flock of Suffolk sheep, dairy goats, a few rabbits, their dog and a lone beef heifer, Thelma. In her spare time, Debra is a poultry and sheep project leader for Kewaunee County 4-H.