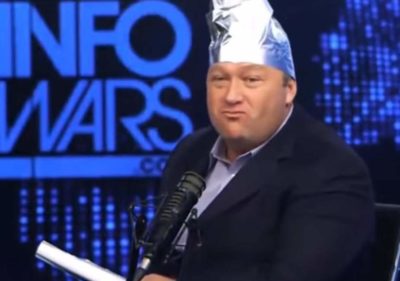 “Earlier today, we removed four pages belonging to Alex Jones for repeatedly posting content over the past several days that breaks those Community Standards,” Facebook announced on August 7, 2018.

“More content from the same pages has been reported to us – upon review, we have taken it down for glorifying violence; which violates our graphic violence policy, and using dehumanizing language to describe people who are transgender, Muslims and immigrants, which violates our hate speech policies,” a Facebook spokesperson told The Guardian.

The Alex Jones Page, The Alex Jones Channel, The Infowars Page, and The Infowars Nightly News Page are all gone from Facebook. In addition, YouTube, which is a subsidiary of Google, quickly followed suit by removing those titles from its platform.

It was Apple iTunes that launched the “info-war” against Jones by removing five of his shows from its podcast directory.

Surprisingly, Apple tried to muddy up its deletion by announcing the removal of InfoWars at 3 a.m., The Guardian noted. Apple reportedly left one InfoWars program entitled Real News with David Knight in iTunes.

Apple’s action could be a huge blow to Jones’s business because iTunes is the most important platform for podcasts. Without Apple, Jones will find it difficult to reach much of his audience.

“Apple does not tolerate hate speech, and we have clear guidelines that creators and developers must follow to ensure we provide a safe environment for all of our users,” an Apple Spokesperson told Buzzfeed.

“Podcasts that violate these guidelines are removed from our directory, making them no longer searchable or available for download or streaming,” the Apple spokesperson claimed. “We believe in representing a wide range of views, so long as people are respectful to those with differing opinions.”

Microsoft joined the “Info War” on Jones by removing him from its LinkedIn platform on Monday. Pinterest, a smaller social media company, followed suit by deleting Alex Jones on the same day.

Where To Find Alex Jones

Spotify, a Swedish audio-streaming service, reportedly deleted every episode of The Alex Jones Show from its platform on Monday. And now, ironically, Spotify is still broadcasting three live InfoWars shows.

“Everyone must turn to Infowars as a standard to be saved,” Jones said. “Tell folks, ‘Hey, it’s the most censored thing in the world for a reason. Jones is dialed in. Jones knows what’s going on.’”

The Alex Jones Info War Might Protect Your Free Speech

“Whether Jones wins or loses, his suit, according to First Amendment lawyers, will be a building block for the way we think of free speech in the age of the internet,” Wired’s Emma Grey Ellis wrote.

“False speech does not serve the public interest the way that true speech does,” the scholars wrote. “And indeed, there is no constitutional value in false statements of fact.”

Readers might want to read the previous sentence a few times to get the gist of where this is going. Here’s why: Truth gets little protection when tyrants frame the debate. After all, how did Socrates do with truth? How did Jesus do? Pilate and the Jewish leaders said His words did not serve the public interest. So by their definition … the words He spoke were false. And by Hitler’s standards … everything a Jew said was false and did not serve the public interest. No mention is ever made with respect to what “public interest” actually is or how it’s determined.

The War Against Alex Jones Will Affect All Americans

Please help us out by voting in our poll on the main Off-The-Grid page. If you would like to discuss and debate this topic on a podcast, please email me.

You may also enjoy reading an additional Off The Grid News article: History Reader Beware: The Past Is Full Of “Fake News”