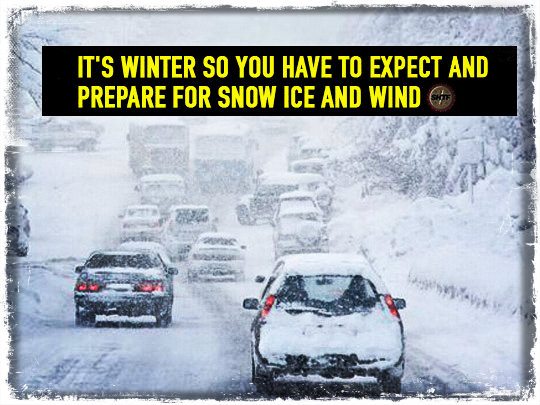 The news channels and the Internet show miles and miles of vehicles stranded on slick roads. They show cars that have smashed into each other and some simply abandoned. The pictures and videos show cars off in ditches and motorists walking away from their vehicles, walking to where, though, well that’s anyone’s guess. Walking into another crisis is the likely outcome.

Emergency workers in Kentucky along with the National Guard were patrolling Interstate 75 helping stranded motorists, by providing water, fuel, and snacks and trying to move cars out of the way of emergency vehicles. Eventually certain stretches of the Interstate were closed to non-emergency traffic. People trying to get home or get to the store jammed the highways preventing anyone from getting anywhere and add slick roads to the mix and you have a disaster in the making.

Snowplows in some cities could not get ready for the massive blizzard of 2016 because there were too many motorists on the highways. Apparently everyone was let out of work at the same time. No thought was given as to the impact this would have. No one thought ahead, a storm is coming so let’s jam the highways by making people come into work and then let them out at noon like every other business and governmental offices.

Road crews were trying to treat the roadways with salt and plow what little snow had already fallen, but there were too many motorists trying to get home, or trying to get to the stores and many could not do either. In Washington D.C. a few inches of snow paralyzed the city, the blizzard had not even made its way to the city, and yet, chaos ensued.

Do not wait for them to say, “Hey, it’s snowing 3 inches an hour, so maybe you better stay home and off the highways”.

Start planning early. Save up sick days and vacation time for these types of situations. Unfortunately, those without vacation time or sick days coming cannot always stay home if a storm is coming. Employers need to readjust their emergency planning for times like this as well. Letting everyone out of work at the same time is unavoidable in many cases, but why have everyone come to work in the first place when a blizzard of historic proportions is predicted.

Look ahead during the summer months and save a few sick days and have a few days of vacation time set back.

Why does everyone wait until snowflakes start falling to rush to the stores? Why didn’t everyone already have their emergency supplies sitting on the pantry shelves? Good questions and we have asked these very questions every time something like this happens.

Your Survival Is Up To You

You may not always get the National Guard and emergency services to deliver food and water to your car, like some drive in fast food restaurant, while you are stranded along a highway in a snowstorm or during any other crisis for that matter. They may get to some people, but may not get to all, so you have to be ready to go it alone. The best remedy, however, is not to be on the highways in the first place, this ensures you will not be stranded on one.

Plan far enough ahead so you do not have to be out in the storm. The police and others are pleading with motorists to stay off the highways so road crews can do their jobs and so emergency first responders can get to the sick and injured. Do not become part of the problem during a crisis.

This article It’s Winter So You Have To Expect and Prepare For Snow Ice and Wind was originally posted on: prep for shtf