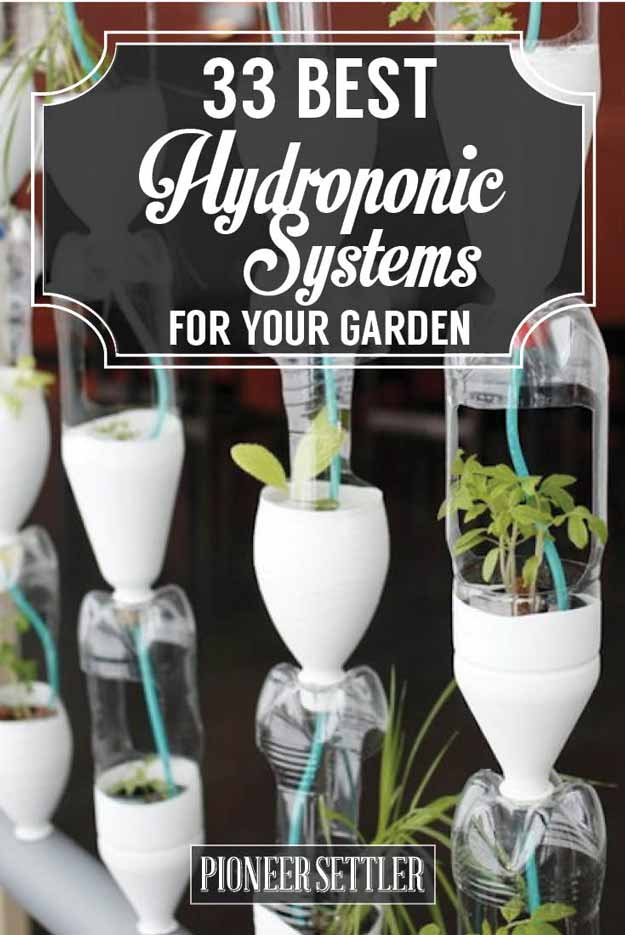 You’ll never believe some of these hydroponic systems! Great ideas for vertical gardening, indoor gardening, or gardening outside your natural region.

Hydroponic Systems Round Up

33 Best Hydroponic Ideas For Your Garden

Hydroponic gardening is gardening with mineral-rich solutions instead of soil! It’s soilless gardening, and it’s useful for growing plants outside their native habitat, indoors, in areas where you have no yard, and more!

Get inspired with these 33 Hydroponic gardening systems. Maybe you could build one for your home?

Just follow the steps and you’ll be well on your way to growing your plants without soil.

Add some twists and turns.

Got some space, then this may just be the hydroponic system for you. Watch the tutorial here.

Paint them white for aesthetics.

Upcycle your bottles and create your own system.

Such a great idea. It makes it so much easier to move around.

Looks stunning right? You can buy it here.

Compact and easy to build. Check it out here.

Make use of PVC gutters for this gardening project.

A small container, a couple of pipes and these instructions are all you’ll need to build one.

Take advantage of rain water with this DIY tutorial.

A bit costly but if you’re in to splurge, this is it. Buy it here.

Super simple and cute. Get the steps here.

Watch it made here. So easy.

Just looking at it can really calm your nerves.

You can really do everything with your phone. See how here.

A smart hydroponic system that also give you light presented by Ohneka Farms. Get more information here.

Utilize the power of air and reap the benefits with this DIY Powerhouse Hydroponic.

Living in an apartment, this is for you. Check it out here.

The windowsill is the perfect place for this. Just the right amount of sunlight. Watch the video tutorial here.

Take advantage of LED technology in this Hydroponic system.

Learn more about deep water culture with this video.

Learn more about the Kratky method. It’s simple and really effective. Read more about it here.

A method originally practiced by the Ancient Aztec is now something you can try. Check it out here.

Set it up and let it drip.

A method that’s not only efficient but cuts the growing time in half.

Basic how to on aquaponics here.

Those are only some of the amazing hydroponic garden systems out there! I love some of those ideas… They range from beautiful to downright functional. However, I believe anything that grows is a think of beauty!

Want to see how you can make one for only $35? Then check out this video tutorial from Scott’s Place:

Which hydroponic system are you going to try? Let us know below in the comments!

How To Make Lacto-Fermented Sauerkraut In A Mason Jar

The thing about homesteading is you get to create your own ingredient right from scratch! Cheese, yogurt, butter and now sauerkraut, a delightfully sour and crunchy ingredient you can use on your meals — or consume by itself — while on a homestead, or while facing this health crisis!

This homemade sauerkraut is a great meal because it has a long shelf life. You can either make plain sauerkraut or mix it with herbs and spices. In this tutorial let us make Lacto-fermented sauerkraut that preserves all the good probiotics in a jar, good for your guts.

So how to make sauerkraut in a mason jar?

RELATED: How To Make Buttermilk On Your Homestead

Not only does sauerkraut spoil a long time, but it is also a meal in itself, and it is also easy to make! You don’t need to be an expert cook, all you need to do is follow these simple steps.

So let us get started. Here are the steps in making sauerkraut in a mason jar.

Wash all the equipment and utensils you need. Wash your hands too.

You don’t want to mix your sauerkraut with bad bacteria, anything that is going to make you sick.

Next, remove the faded leaves from your cabbage. Cut off the roots and the parts that don’t seem fresh.

Step 2: Cut the Cabbage Into Quarters & Slice Into Strips

Cut your cabbage into quarters and remove the core. Then, slice it into strips.

Step 3: Place in a Bowl & Sprinkle With Salt

Put the stripped cabbage into a bowl. Sprinkle the cabbage with 1 tablespoon of salt.

TIP: Use canning salt or sea salt. Iodized salt will make it taste different and may not ferment the cabbage.

Massage the cabbage for five minutes or more to get the juice out.

TIP: You’ll know it’s ready when you see a bit of juice at the bottom of the bowl and will look similar to coleslaw.

Add the cabbage to the mason jar gradually. Press it in hard to allow the juice to come out. Do this every time you add about a handful of cabbage.

IMPORTANT: Food should be covered by the liquid to promote fermentation. Add any excess liquid from the bowl to the jar.

Step 6: Press a Smaller Jar Into the Mason Jar

You want to squeeze every ounce of that juice from the cabbage. To do this place the mason jar in a bowl and get a smaller jar.

Fill it with water or marble to make it heavy. Press it into the bigger mason jar. Allow any juices to rise to the surface.

Step 7: Cover the Jars With Cloth & Tie With Rubber Band

Leave the small jar on. To keep your jars clean from annoying insects and irritating debris, cover your jars with a clean cloth. Then, use a rubber band to tie the cloth and the jars together, putting them in place.

Set it aside in a cool dry place, away from direct sunlight. Check the water level daily. It should always be above the cabbage.

After about five days, you can taste your sauerkraut. If the taste is to your liking, tightly cover it with the lid and store in the fridge or cellar.

NOTE: If after five days it’s still not your desired taste, leave it for a few more days. This will allow the fermentation process to continue.

You can now enjoy your sauerkraut in a mason jar. Enjoy its goodness! You can use it as a side dish or mix it with your favorite sandwich.

Things to Remember in Making Sauerkraut

Let us watch this video from Kristina Seleshanko on how to make delicious Lacto-fermented sauerkraut in a mason jar!

So there you have it! Making Lacto-fermented sauerkraut in a mason jar is as easy as slicing the cabbage into strips. Remember that as long it remains unopened, your sauerkraut can last for months. Best of all, you can partner this sauerkraut in many recipes.

What do you think of this homemade recipe? Share your best sauerkraut recipe in the comments section below!

Fellow homesteaders, do you want to help others learn from your journey by becoming one of our original contributors? Write for us!

9 SPRING VEGETABLES FOR YOUR GARDEN

Having plants in the house will bring peace to people. Having a little garden with vegetables is even better! You can grow these vegetables in your backyard garden easily as well!

Growing veggies in your garden will give you an opportunity to understand what you eat and value it more. Early spring is when most vegetables are being planted. Keep reading to learn about 9 spring vegetables that anyone can grow in their garden!

Tomato is the most popular garden vegetable in the States! There are different varieties to choose from. Tomatoes need to be planted in early spring because they won’t survive a frost.

Because tomatoes are consumed daily, try adding them to your garden! They’re not difficult to grow either.

Eggplants are known to have low-calorie, vitamins, minerals, and nutrients. Plus, they are delicious! So why not plant them in your garden?

Eggplants shouldn’t be planted too early because they won’t be able to survive a frost. So you could consult an expert in your area before you plant your eggplants.

Beets are known to be a superfood for its various health benefits. They’re easier to grow in the garden, usually around late March or early April.

If the weather is always cool, beets will keep getting bigger and bigger. Once the weather starts to warm up, you’ll need to harvest them, or they’ll go to waste.

Spinach is a delicious early spring veggie, and it’s also very beneficial for health. And it’s not difficult to grow spinach in your garden!

Spinach needs cold weather to grow. Getting spinach to grow is easy, but keeping it growing will require some extra care.

Peas are usually planted in late April. Peas will die in freezing temperatures, but they also won’t survive the heat either. So make sure you plant your peas in early spring.

Peas are widely used in many different ways, and there are different types of peas. The soil you’ll be planting your peas should be suitable for them, so make sure you ask while buying seeds.

There are different types of carrots, but regardless of their size and color, it’s a fact that carrots are both delicious and rich in vitamins.

They’re root vegetables, so with proper sun and watering, they can be picked up as baby carrots as well.

A radish is an excellent option for beginners because it doesn’t require too much care. Radish is easy to harvest.

Radish grows fast, so it’s better to keep an eye on it after a few weeks. Radish usually is grown pest-free, but there’s always the chance of unwanted guests, so watch out for worms. Radish can be eaten raw or can be added to garnish recipes.

Cauliflower isn’t the easiest vegetable to grow at home, but it is very popular.

Cauliflower grows better in colder weather, so before you plant it, consider the climate of your garden. Cauliflower can be eaten raw or cooked, and it is known to be very beneficial for health.

Asparagus plants get more productive with each harvest, and mature asparagus harvest can last for months! Make sure you plant them at the correct time, or else they might go to waste.

All the vegetables listed above are great for your healthy diet, and it’s fun to watch them grow. So don’t miss out on the opportunity to grow your own veggies and eat healthy this spring!

So tell us which veggies will you be growing this spring? Tell us in the comments section!