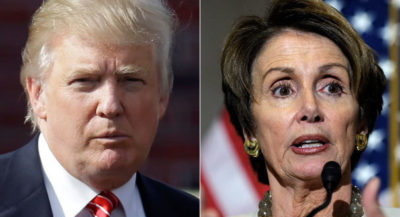 Once they have them, Nancy Pelosi and other Democrats can easily make Trump’s tax returns public. Particularly, Pelosi can submit the returns to the full House.

Requesting the President’s tax returns “is one of the first things we’d do,” Nancy Pelosi tells The San Francisco Chronicle. She adds, “that’s the easiest thing in the world.”

It is illegal for the government to make a person’s federal tax returns public without his or her permission. Still, Congressional committees have the power to order the IRS to turn over tax records to them, law professor George Yin notes.

Nancy Pelosi can request Trump’s returns through the House Ways and Means Committee, Yin tells NPR. To explain, all Democrats need is a simple majority on that committee to demand tax returns.

Democrats will have that majority in January because they gained 34 seats in the midterm elections and currently hold 51.8% of the House of Representatives. Consequently, Nancy Pelosi will probably be the majority leader in the house after January 1, 2019.

Under the current law, the Ways and Means Committee has the unqualified ability to request anybody’s tax return, Yin reveals. As a result, Secretary of the Treasury Steve Mnuchin will have to hand the returns over.

Trump can sue to block the request but nobody knows how the courts will respond, Yin states. No federal judge has ever ruled on the issue of tax return requests. So, there are no legal precedents to govern the process.

Democrats blamed Mellon for causing the Great Depression and accused him of tax fraud. Nonetheless, the fraud charges went unproven.

Once they have them, Nancy Pelosi and other Democrats can easily make Trump’s tax returns public. Particularly, Pelosi can submit the returns to the full House.

Items submitted to the full House automatically become public record. Furthermore, Yin thinks the returns will become public on the internet if someone submits them to the House.

For this reason, Trump’s returns will become public in violation of federal laws that make it illegal to publicize returns without a taxpayer’s permission. Moreover, many private details of the president’s business will be available to reporters.

Nancy Pelosi wants Trump’s tax returns because exposing them is a cheap and easy way of hurting the President.

Additionally, Pelosi can show she is an opponent of the president to left-wing Democrats. Fighting for Trump’s tax returns will also help Nancy Pelosi regain her former position as Speaker of the House.

Anti-Pelosi Democrats are already plotting to block Nancy’s return to the Speakership, The Intelligencer reports. For example, U.S. Representative Tim Ryan (D-Ohio), who wants to be the Speaker, is leading the effort.

Is Nancy Pelosi Trying To Protect Herself Or Trump?

All in all, Nancy Pelosi is trying to protect her position by taking the offensive against Trump. Besides demanding tax returns, Pelosi plans “strategic use” of subpoena power against the president, Real Clear Politics reports.

Will Nancy Pelosi’s Request For Trump’s Returns Lead To Impeachment?

Impeachment will probably fail in the Senate because Republicans will control a majority (51 to 54 seats) in that body next year. Therefore, Democrats could end up fighting over impeachment in the House.

Nancy Pelosi is offering a limited investigation of Trump and his tax returns as an alternative to impeachment. An interesting possibility is that Pelosi knows there is no evidence of illegality in Trump’s tax returns. Hence, Pelosi could make the returns public to stop impeachment.

No matter what happens, a battle over Trump’s tax returns will be one of the main events in the next Congress. Only history will tell if Nancy Pelosi will make the President’s tax returns public.

Democrats will keep demanding the returns because such a release is a popular idea. Significantly, polls show that 60% to 74% of Americans want Trump to release his returns, the Mic reports.

You may also enjoy reading an additional Off The Grid News article: Americans ‘Should Assume’ Their Tax Returns Can Be Hacked From The IRS, Expert Says

What are your thoughts on Nancy Pelosi and her quest to retrieve President Trump’s tax returns? Let us know in the comments below.

The post How Nancy Pelosi Plans To Get President Trump Through His Tax Returns appeared first on Off The Grid News.