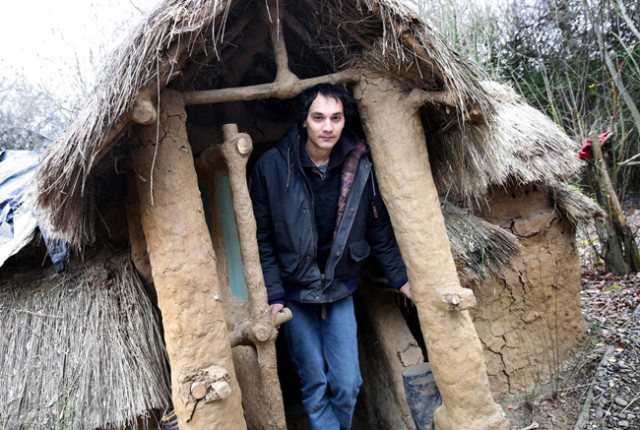 Daniel Pike from Watford has been told to leave his house situated in the woods. Daniel Pike has built a remote shack made out of harvested clay from the riverbed, mud, as well as other materials that he found in Merry Hill forest. This modern day hermit sleeps on a mattress made from dried leaves, and has built window frames out of driftwood.
Unfortunately, The Woodland Trust representatives said that they own the site so he has to evacuate the land. However, Mr. Pike argues: “I am not doing any harm to anyone here. I grew tired with modern life”.”I came out to the woods, starting in a tent and decided to build a home. I won’t be leaving.” What made him decide to move there was the fact that he didn’t have money for a mortgage and his recent nervous breakdown did not helped his situation, on the contrary. Tired of the pressure of our modern times, he wanted a simple life, isolated from all the potential noise and stress, in his self-built home located in Carpenders Park.

Mr. Pike started building his unusual home four years ago, when he came across the location after becoming homeless. ”When I first saw the land it was bare but I knew straight away it was perfect,” he stated. “The main structure took seven attempts and six months to build”. ”We belong to the land, the land doesn’t belong to us. I don’t think I’m squatting.”