If you've decided to read this post, chances are you own at least one gasoline container with a broken fuel spout. I, too, have a couple of old fuel containers with broken nozzles. About a year ago, I came across a product that looked promising, the EZ-Pour Fuel Jug Spout. I decided to give it a try, thinking I could use it for my old gas cans. What were my thoughts? Read on to find out!

EZ-Pour Fuel Jug Spout | To Spout or Not to Spout?

Over the past few decades, fuel containers have evolved significantly. The biggest change is in the materials. Most gas cans these days are made from High-Density Polyethylene (HDPE), which is a rugged plastic material. The containers made from this material are lightweight and last for a long time under normal use. Their weak point, though, is their spout. These are made from more lightweight and flexible plastic, which have a tendency to crack and break after a few years.

This is exactly the problem I have experienced myself. I had two smaller gasoline containers that I used in my vehicle emergency kits. Since I live in Arizona, the heat and the dry air caused the fuel spouts to crack, defeating the purpose of the containers. But, I didn’t want to throw them away. They were still in perfectly good condition. That’s when I started looking around for replacement spouts. Eventually, I found the EZ-Pour online and purchased a couple for my containers.

Combined Manufacturing, Inc. makes different versions of the EZ-Pour Spout. There is a Water Jug Spout, a Hi-Flow Fuel Spout, and a Hi-Flow Water Spout. The most popular one is the EZ-Pour Fuel Jug Spout which I will review here. They also make various adapters for Jerry Cans, Chilton Gas Cans, and Racing Jugs. In other words, if you have a plastic fuel container, they probably have an EZ pour spout kit for it. 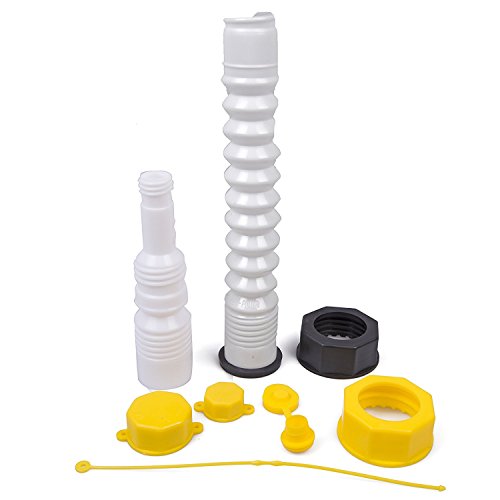 Only pre-2009 gas cans fit spouts currently out in the market. The reason is the EPA, in their bureaucratic wisdom, decided that fuel can spout needed “improvements” to meet new standards. The result was spouts that are almost impossible to use. One perfect solution is the EZ-Pour Spout. For residents of most US states, you can purchase it and replace the existing one in your older gas can.

The EZ-Pour Spout is priced at $10.95 on the manufacturer’s website, plus shipping fee. Retail and online prices will vary by a buck or two.

I purchased two of the regular EZ-Pour spouts because they fit my fuel containers (a Blitz and a Wedco). The first thing I noticed is how long they are. This is apparent because both of my containers are small ones—on larger containers they will seem normal.

The spouts don’t fold-up or collapse into the container. Instead, they're both detachable and extendable. This does take up less space and would normally increase the risk of spillage, but the quality of the top cap and the base cap will prevent this from happening. The tube is strong yet has some flexibility, which is what you want in a spout. The caps are very sturdy and fit well with both the spout and the container. The kit also contains a second cap for the spout or can vent, a replacement push-in vent, a second base cap, and a flame arrester. 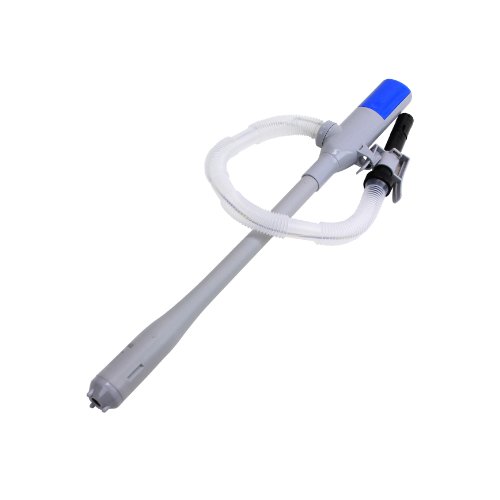 When I put mine together and installed them on my gas containers, I was pleased with how everything fit together. The materials are high-quality and solid. I wasn’t afraid of breaking anything while I put it all together. In addition, it only took me a couple minutes to assemble and install everything.

A few weeks ago, I decided to put these to the test with real fuel and a real vehicle. I went to my local gas station with my old containers and their new spouts. It takes an effort to unscrew the fuel spout from the can, which is a good thing. That means it is threading good and is unlikely to either unscrew or spill. After I filled the can, I screwed the spout back on and put it in the trunk of my car. When I got home, there was no fuel in my trunk and the cap was still on the spout.

After, I went to my other car to fuel it up from the can. I took the cap off, put the spout in the tank, and tilted the container up. Everything flowed easily and in a few seconds, the can was empty. Plus, no fuel was spilled. The only catch is the flap on the fuel filler tube wanted to hang on to the fuel spout. After a little wiggling, it came out, and I replaced the car’s fuel cap. In other words, the EZ-Pour spout worked like a charm.

If you have any pre-2009 fuel containers laying around, you should consider getting an EZ-Pour fuel jug spout for them. They will allow you to continue to use your old style gas can with a spout that actually works well. The EZ-pour fuel jug spout could easily be the best gas can spout solution out there. I highly recommend them, and they won’t disappoint! Overall Rating 8/10.

What are your thoughts about the EZ-Pour Fuel Jug Spout? Let us know in the comments section below!

Up Next: Itzagascan Product Review

Editor’s Note: This post was originally published on September 23, 2017, and has been updated for quality and relevancy.