Dexter Cattle: The Miniature Cow That Lives On Half An Acre

Love the idea of farm fresh milk harvested at home, but lacking in space? Maybe you want milk for your family, but are not sure what you’d do with 8-10 gallons per day from a modern Holstein? Perhaps miniature dairy cattle are the answer.

Dexter cattle are a heritage breed of cow from Ireland, with unsurpassed hardiness, resilience and versatility. They’re considered a dual-purpose breed, ideally suited to producing rich flavorful milk and a high percentage of meat, and some owners even use their docile cattle as oxen.

The small size of Dexter cattle comes with many large benefits. A mature cow weighs in at roughly 600 to 800 pounds, or about one-third the size or your average Holstein, making them ideal for small land holders to manage. They’re a common choice for children in 4H projects because they’re docile and easy to handle, and their shorter stature makes them less intimidating to children. Their low weight means that they’re easier on the land, which can help prevent damage in wetter areas.

A smaller size means Dexters require less food and pasture space than a full-sized dairy cow. Depending on the forage, one-half to 1 acre of pasture is enough to sustain a Dexter at high summer.

In the winter, they require 12-15 pounds of hay per day with a little grain, or closer to 20 pounds per day on hay alone. When in sufficient supply, they can live on poor quality or overgrown pasture. This makes them even more adaptable for new land holders who may not have ideal dairy pasture on hand. 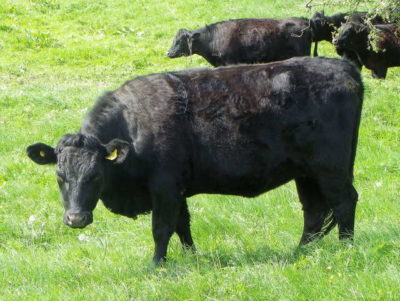 A Dexter can be expected to produce 1 1/2 to 2 gallons of milk per day as a rule for a 305 day lactation cycle, but as with any breed, there are exceptional cows that can produce up to 5 gallons per day, so yields will vary. Nonetheless, their production will reduce down to mirror the needs of the calf if they’re only milked once daily, rather than twice as is common in production cows. The milk contains 4 percent milk fat, which is more than most production species, but somewhat less than high cream production cows such as Jerseys.

If you’re going to have milk, you’re going to need to breed your cow and tend a calf. Dexters are commonly crossbred with standard-sized cattle because they’re known for their ease of calving. Cross breeding with a Dexter can mean an easier time calving for a first-time mother. Pure-bred Dexters keep those easy calving benefits, and add in naturally strong mothering instincts, as well. They can continue to calve until they’re 15 or more years old.

Though Dexters are smaller cows, they produce a much higher percentage of usable meat than most breeds. Grain-finished Dexters can yield 60 percent of their live weight in meat, or 55 percent for grass-finished steers. In some exceptional animals, 70 percent is possible. This compares with 40 to 50 percent yield for other dairy breeds. This means 350-400 pounds of meat in your freezer every 18-24 months, or a high value calf to sell. Calves in the Northeast are currently selling for $1,500-$2,500.

Though officially considered a dual-purpose breed, they’re commonly used as small scale oxen because of their natural pulling instinct and readiness to follow commands. Though smaller than any other working breed, they can pull a disproportionately large amount of weight.

Dexters are raised around the world, and though they’re much less common than standard-sized breeds, they’re becoming more popular as small-scale land holders seek new ways to be more self-sufficient. The livestock conservancy lists their status as “recovering” and they’re now common enough to no longer be an “at-risk” species. Expect to pay a bit more for your calf at the outset, but know that it’ll come back to you in ease of management and higher value calves down the road. Breeder registries are available online in most parts of the world. There are many animals that are available from smaller scale unregistered breeders, as well.

Do you own Dexter Cattle? What advice would you add? Share it in the section below:

The post Dexter Cattle: The Miniature Cow That Lives On Half An Acre appeared first on Off The Grid News.