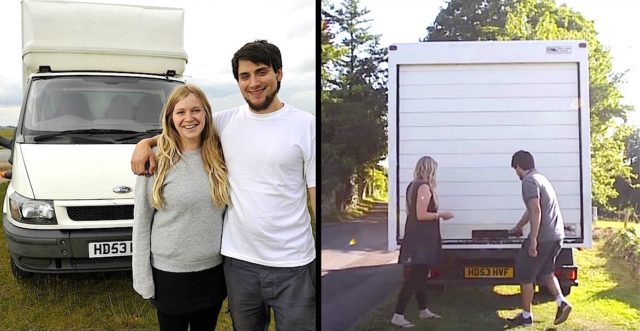 Being a young couple in a big city can be quite challenging when it comes to finding cheap rent without giving up on your hobbies. Since rent prices are becoming increasingly higher by day, young people tend to search for alternatives.

The same applies for this next couple, who decided to give up their 9 to 5 jobs and up-cycle an old van that eventually became their home. Adam and Nikki got tired of living in the city, spending all their salaries on rent and bills and having to give up their dreams of travelling.

So one day, they stumbled upon a white Ford Transit Luton on Ebay and bought it for $4,500 and they spent another $6,500 to convert it into a welcoming apartment. The coolest part about this story is that they did everything by themselves, learning about DIY and up-cycling projects from Youtube.

After the reconstruction, the van became a functioning apartment with a kitchen, shower, bedroom and a nice little porch for sunny days. Now Adam and Nikki can relax and focus on their plans of visiting Europe throughout a period of 1 year.

Despite being a van and not connect to a mains water supply, the van still has a sink with water, which the couple can use to fill up their kettle

A 3D model of the white transit van, which shows how the back of the van is the living, bedroom and kitchen area, while the front is the cab for driving