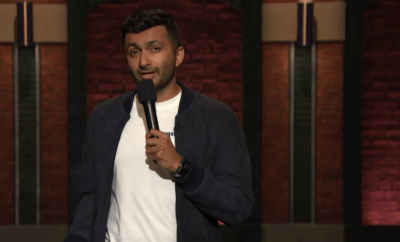 The AAA invited Patel to perform at its cultureSHOCK: Reclaim charity event, The Columbia Spectator reports. Nevertheless, AAA organizers decided that Patel tells unsafe jokes and they told him to get off the stage in mid-act.

Significantly, the AAA leaders reportedly think jokes like “no one looks in the mirror and thinks, this black thing is too easy, let me just add another thing to it” are not safe for students. As a result, they now consider any quips that attack racism to be unsafe jokes.

Furthermore, the AAA allegedly cut off Patel in mid-routine. The Spectator claims that AAA officials would not let Patel complete his unsafe joke performance.

Patel is apparently offending students by refusing to promote their political beliefs, The Spectator states. For this reason, any comedian who appears at AAA events needs to be politically correct.

“The message they were trying to send with the event was opposite to the jokes he was making, and using people’s ethnicity as the crux of his jokes could be funny but still offensive,” student Adam Warren exclaims.

Did Columbia University Fire A 32-Year-Old Comedian For Being Too Old?

On the other hand, Sofia Jao, who was an audience member, thinks Patel’s age is the problem rather than political correctness or unsafe jokes.

“When older generations say you need to stop being so sensitive, it’s like undermining what our generation is trying to do in accepting others and making it safer,” Jao complains.

Notably, Patel is 32-years old, so he is just a decade older than the students. Patel himself asserts that he is trying to expose students to the “real world.”

Regardless, Patel’s unsafe jokes about blacks and gay people greatly offended the AAA, Inside Higher Ed reports. The AAA is still standing by its claims about unsafe jokes on its Facebook page.

“We acknowledge that discomfort and safety can coexist, however, the discomfort Patel caused was unproductive in this space,” the AAA Facebook page declares.

Campuses Are No Longer Safe For Comedy

Notably, some of America’s top comedians including Jerry Seinfeld, Carlos Mencia, and Chris Rock are refusing to appear on college campuses. Particularly, Rock and Seinfeld are claiming that campus audiences are too sensitive for their unsafe jokes.

For instance, Seinfeld admitted he hates working on campuses where students are “so PC” (politically correct) in an ESPN interview. Rock has told reporters that he will not perform on campuses because students are “too easily insulted.”

In fact, one student’s complaint may spark a campus investigation, Carlos Mencia alleges. Mencia learned that politically correct witch hunts are not funny at Rutgers University in 2014. For example, The Wrap reveals that one student activist’s complaint drove Mencia off campus.

Rock and Seinfeld can afford to stay off campus because they are making big money in venues such as Las Vegas. Notwithstanding, lesser comics like Patel rely on campus gigs to pay their bills.

Under these circumstances, many comedians are censoring their acts and removing unsafe jokes for college audiences.

To illustrate, comedian Judy Gold admits she will not tell unsafe jokes to student audiences, Inside Higher Ed noted. Specifically, Gold removes jokes about gays and minorities from college acts.

“Why is it that everyone has to adjust to everyone else,” Gold laments on Vice. “Don’t hire me if you don’t want to hear what I have to say.”

As a consequence, many other comics also remove “unsafe jokes” from their acts when they appear on campus, Inside Higher Ed reveals. Unsafe jokes now include any mention of gay people, sexual orientation, minorities, politics, or sex. Instead, comics end up joking about the food in the cafeteria.

By and large, the politically correct environment on today’s college campuses is unsafe and unfit for humor and free speech.

You may also enjoy reading an additional Off The Grid News article: Capital Letters Banned By University Because They Could Upset Students

What do you think about “unsafe jokes” in today’s college environment? Do university students need to toughen up? Let us know in the comments below.

The post Comedian Kicked Off Campus Stage For Making Unsafe Jokes appeared first on Off The Grid News.