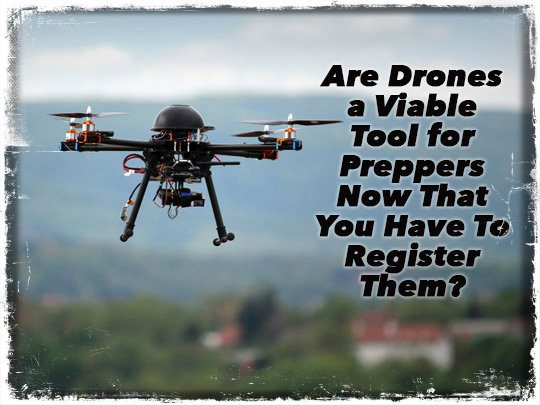 Are Drones a Viable Tool for Preppers Now That You Have To Register Them? When the drone craze first took off, only commercial drone operators had to register with the FAA, essentially they needed a flying permit, which granted them authorization to conduct their business, as long as they did not interfere with any aircraft, and stayed a certain number of miles away from airports. Failure to do so would result in stiff penalties. Today, however, any owner now has to register their drone. You don’t need a license, just simply register with the FAA if the drone is for private use.

Why does the FAA require registration? As with many things, abuses happen, and drones are no exception. They are crashing at tennis matches, invading the backyards of homeowners, and flying too close to airports/aircraft and so on. The authorities claim they need a way to trace drones back to their owner, in particular, those drones that are caught violating no-fly zones around airports and other sensitive areas.

It probably won’t take long before retailers must fill out the registration paperwork before they sell a drone to anyone. The FAA will find out the honor system probably doesn’t work well, a system that allows people to register after purchasing the drone. This is all speculation at this point, but it seems plausible this might happen. Of course, if you already own a drone then it is up to you to register it or not.

Here Is What the FAA Has To Say

Drones can be a nuisance, and they have been shot down when caught hovering in the backyard of homeowners. A particular case in Bullitt, County Kentucky from July 2015 raises the question about who owns the airspace above your home. The homeowner shot down a drone hovering over his property after his daughter spotted it as she was sunbathing in the backyard.

The homeowner was arrested after shooting down the drone, (for firing into the air) but the case was thrown out, however, the owner of the drone is suing claiming the homeowner does not own the space above his own home (Ernst, 2015).

The homeowner states that after shooting down the drone, he was confronted by four men who allegedly stepped onto his property to confront him. The homeowner was well armed, however, and when he revealed he was armed and willing to fire more rounds that day the men hastily retreated.

You can expect more drones to bite the dust as their popularity increases. It is almost impossible to fly one in any suburban setting without flying over someone else’s property, and now that they have to be registered owners can easily be tracked down, and you don’t want to get into legal problems or confrontations with armed landowners who claim you are violating their privacy.

If you own a drone as a Prepper then you do have to be careful of how you operate your drone. The particular drone shot down in Kentucky cost 1,800 dollars and it was a total loss. It is not clear if the operator was spying or just inept, because he stated he was trying to take pictures of a particular home, but one has to wonder why the drone was hovering over the wrong home taking pictures.

He may have been inexperienced and this is a lesson to all who own or plan to own a drone. Learn how to operate it, and learn in a controlled environment.

If you are trying to stay under the radar you would not want to register your drone, but the penalties for not doing so are to be decided, and you can be assured if caught the drone would be seized and it will cost you money in fines.

Of course, there will those that say as they do with a Ham Radio License why do you need a license when the SHTF. Well, you will be purchasing the drone before something happens and certainly will be practicing with your drone. The law states you have to register before the first flight.

Obviously, some people do not want to register, because they do not want to be tracked, but if you get caught with an unregistered drone, you can rest assured that you will be even more embedded in a governmental data base, a federal one.

This article Are Drones a Viable Tool for Preppers Now That You Have To Register Them? was originally posted on: prep for shtf