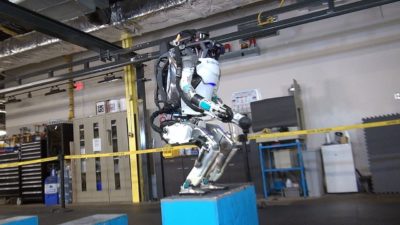 A mysterious company with connections to the Pentagon is showing off a robot ninja. Moreover, that company is openly developing what appears to be a robot soldier or stormtrooper.

Notably, a video shows Boston Dynamics’ Atlas performing ninja-like acrobatics. The video captures Atlas navigating an obstacle course like those that soldiers use in basic training.

Additionally, Atlas is practicing parkour in one video. To explain, parkour is a training discipline derived from military obstacle course drills. As a result, Boston Dynamics’ robot ninja already performs some military maneuvers.

DARPA Could Be Developing A Robot Ninja

Boston Dynamics is a Massachusetts company that has received funding from the Defense Advanced Research Projects Agency (DARPA). Furthermore, DARPA is the agency that funds development of new weapons technology for the Pentagon.

On the negative side, Boston Dynamics has not explained Atlas’s true purpose. People may wonder if Atlas is the world’s first robot soldier.

Significantly, the latest version of Atlas looks like the Super Battle Droid robots from the Star Wars film Attack of the Clones. In the movie, the droids formed a robot army intended for the extermination of the Jedi. Conversely, an earlier version of Atlas looked like The Terminator.

Boston Dynamics’ specialty is the development of robots that walk and move like living creatures. In particular, its most famous creations are Atlas and Big Dog. The Big Dog, which is also known as Spot, is a four-legged robot that moves like a dog

All in all, Boston Dynamics has attracted a lot of attention with videos of Atlas’s feats of strength. For instance, Atlas smashed cement blocks in an earlier video.

On balance, Boston Dynamics’ Atlas could be a threat to your job and possibly even your freedom.

I have seen no reports of Atlas being deployed on job sites so far. Notwithstanding, The Information reports Amazon is developing picker robots to replace human warehouse workers.

Coincidently, the report about picker robots appeared shortly after Amazon announced plans to raise its average salary to $15 an hour. On the positive side, there is no known connection between Amazon and Boston Dynamics.

Meanwhile, the Pentagon could invest in robot ninjas because of a pending recruiting crisis.

To illustrate, retired Army Lt. General Thomas Spoehr estimates that 71% of Americans between 17 and 24 (the most likely military recruits) are ineligible to serve. Consequently, the military will have fewer potential recruits.

Obesity and lack of education, particularly, are the two biggest reasons people are ineligible to serve. For example, Spoehr estimates that there are 30 states where one-third of the population is obese. In addition, 25% of potential recruits lack a high school diploma, or GED, which the military requires for enlistment.

Under these circumstances, Spoehr believes the military will suffer a manpower shortage soon. A robot ninja that could take the place of infantry or commandos is a partial solution for the manpower shortage.

The army could use the robot ninjas as cannon fodder or shock troops in future wars. Robot ninjas could be cheaper because the military would not need to pay them. Also, robot soldiers would require no training, food, or medical care, and would not need veterans’ benefits after the war.

Moreover, robot ninjas will be easier to sell to the public than the draft. To demonstrate, the last time America tried a draft during the Vietnam War, it led to mass protests and riots.

The Robot Ninja Company Is Selling A Robot Dog

The robot ninja is still far from market ready, however. Tech Crunch reports that Boston Dynamics is trying to raise cash by selling a robot dog called SpotMini. The SpotMini is apparently a smaller version of Spot.

Boston Dynamics describes the SpotMini as “the quietest robot built.” Notably, the SpotMinis are designed for commercial purposes and will go on sale next year. Comic book and movie fans will note that ninjas kill in silence.

Despite its name, SpotMini is not exactly tiny. To clarify, SpotMini reportedly weighs 90 pounds. Furthermore, the true purpose of SpotMini, like Atlas, is secret.

It looks as if America may have a robot ninja and potentially a robot army.

You may also enjoy reading an additional Off The Grid News article: Are Robots Catfishing Humans? Here’s How AI Can Fool Us

What are your thoughts on America’s robot ninja? Let us know in the comments below.

The post America’s Robot Ninja Is Almost Ready For Action appeared first on Off The Grid News.