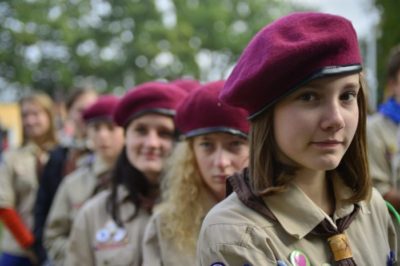 The formation of all-girl Boy Scout troops is yet another episode in the BSA’s struggle to retain any sort of identity in American culture.

Troop 64 at Zion Lutheran Church will teach girls how to whittle and camp. In addition, Troop 64 will join male Boy Scouts from another troop on some outings.

Over 4,300 girls are joining the ranks of Scouts BSA. To elaborate, Scouts BSA is the new brand name for the 109-year-old Boy Scouts of America.

Significantly, the female Scouts are eligible for all the honors of Scouting, including the Eagle Scout rank. Furthermore, female members of Scouts BSA can qualify for every merit badge.

Nevertheless, the Girl Scouts are presently suing Scouts BSA to keep girls out of Boy Scouting.

Girl Scouts of the United States alleges that the Boy Scouts are violating their trademarks by accepting girls. Additionally, the Girl Scouts assert that Scouts BSA is smearing their programs and lying to attract female members.

In a federal lawsuit, the Girl Scouts even claim that Scouts BSA is misrepresenting its own program as Girl Scouting. “BSA is even using quotations from GSUSA’s founder, Juliette Gordon Low, about the value of GIRL SCOUTS programs to promote BSA’s newly launched services,” the Girl Scouts’ lawsuit states.

The federal lawsuit is Girl Scouts of the United States vs. Boy Scouts of America. It is on file in the U.S. District Court for the Southern District of New York (Manhattan).

The Girl Scouts Claim That The Boy Scouts Are Smearing Them

Astonishingly, the Girl Scouts further allege that Scouts BSA is running a covert campaign of misrepresentation to recruit female members. In short, the Girl Scouts are accusing the Boy Scouts of stealing their members.

Moreover, the Girl Scouts allege that Scouts BSA leaders are claiming that only their organization offers “real Scouting.” Particularly, the BSA asserts that the Girl Scouts do not teach girls about camping, first aid, and woodcraft.

Taking The Boy Out Of Boy Scouts

Newspaperman W.D. Boyce originally launched The Boy Scouts of America in 1910. Nonetheless, Boyce did not invent Scouting. Instead, a war hero and General named Robert Baden-Powell created the first Boy Scouts in Britain in 1908.

The Boy Scouts quickly became an American institution and boasted four million members at its height in the 1960s. Today, however, the BSA has just 2.3 million members, which is down from 2.6 million Scouts in 2013.

For example, Trail Life USA calls itself a “Christian alternative to the Boy Scouts.” Specifically, Trail Life excludes gays and focuses on outdoor activities. Trail Life claims to have over 25,000 members in over 8,000 troops across all 50 states.

Other popular Scouting alternatives include Contenders of the Faith, AWANA, Faith-Based Boys, and the Pioneer Club. In addition, there are several Scouting-type groups run by different denominations such as the Royal Ambassadors for Southern Baptists.

At this point, though, the formation of all-girl Boy Scout troops is yet another episode in the BSA’s struggle to retain any sort of identity in American culture.

You may also enjoy reading an additional Off The Grid News article: Gun Control Crazies Now Pushing To Lower Voting Age To 16

How do you feel about all-girl Boy Scout troops? Let us know in the comments below.

The post All-Girl Boy Scout Troops Are Now Forming Across The Country appeared first on Off The Grid News.