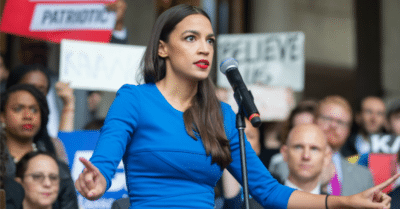 Notably, she does not make those demands publicly. However, Ocasio-Cortez includes those goals in a summary of the Green New Deal found online.

For instance, Ocasio-Cortez wants to “build out high-speed rail at a scale where air travel stops becoming necessary.” In addition, she lists a “goal to replace every combustion-engine vehicle.”

Conversely, the congresswoman provides no details for her plans to achieve these goals. Instead, she merely lists them on a document that she distributes to the media.

The Green New Deal is actually a long wish list of projects, policies, goals, and proposals rather than a plan. For example, Ocasio-Cortez’s list contains such disparate goals as eliminating all fossil fuels and guaranteeing a high-paying job for every American.

In detail, Ocasio-Cortez thinks people will not need airliners if trains move at several hundred miles an hour. Specifically, she believes bullet trains like the French TGV or the Japanese Shinkansen can replace air travel.

Notwithstanding, high-speed trains require expensive grade-separated tracks to reach speeds of 200 to 300 miles per hour. In fact, they would have to replace every railroad crossing with a bridge or a tunnel in a true high-speed train system.

On the whole, high-speed trains cannot operate on most American rail lines because they consist of surface level crossings. As a result, Ocasio-Cortez wants to rebuild America’s entire railroad system and electrify it.

To explain, high-speed trains run on electricity but most American locomotives are diesel. Additionally, a high-speed rail system requires power plants and electric infrastructure. At the present time, the Northeast Corridor between Boston and Washington, D.C. is the only stretch of electrified track in North America.

The original New Deal was a package of public works projects and other legislation designed to ease the Great Depression. Nevertheless, historians still debate the effectiveness of the New Deal to this day.

Significantly, many historians believe the New Deal did not end the Depression. Instead, most economists contend that the Depression only ended with America’s entry into World War II in 1941.

Furthermore, Alexandria Ocasio-Cortez admits that she does not know how to pay for the Green New Deal. Nonetheless, she reveals that deficit spending is a part of her plan.

“We can pay for it with deficit spending,” Ocasio-Cortez tells Business Insider. In essence, she will implement her programs first and then figure out how to pay for them.

Consequently, the Green New Deal will raise the federal deficit to astronomical heights. As an illustration, the cheapest high-speed rail system costs approximately $10.28 million per mile to build. Yet, Ocasio-Cortez wants to build several thousand miles of high-speed rail in the United States.

Moreover, the congresswoman admits to being a believer in Modern Monetary Theory. To explain, Modern Monetary Theory (MMT) is the thesis that the government can pay for everything by printing unlimited amounts of money. However, liberal Nobel Prize-winning economist Paul Krugman denounces MMT as a “blueprint for hyperinflation.”

In the final analysis, Ocasio-Cortez thinks a technology that is too expensive for California could solve America’s problems. Perhaps she will also consider using such wishful thinking to pay for her Green New Deal. After all, Washington has an enormous supply of delusions and fantasies nowadays.

Do you have any thoughts on the Green New Deal and how it could eliminate air travel? Let us know in the comments below.

The post Alexandria Ocasio-Cortez Will Eliminate Air Travel With Green New Deal appeared first on Off The Grid News.