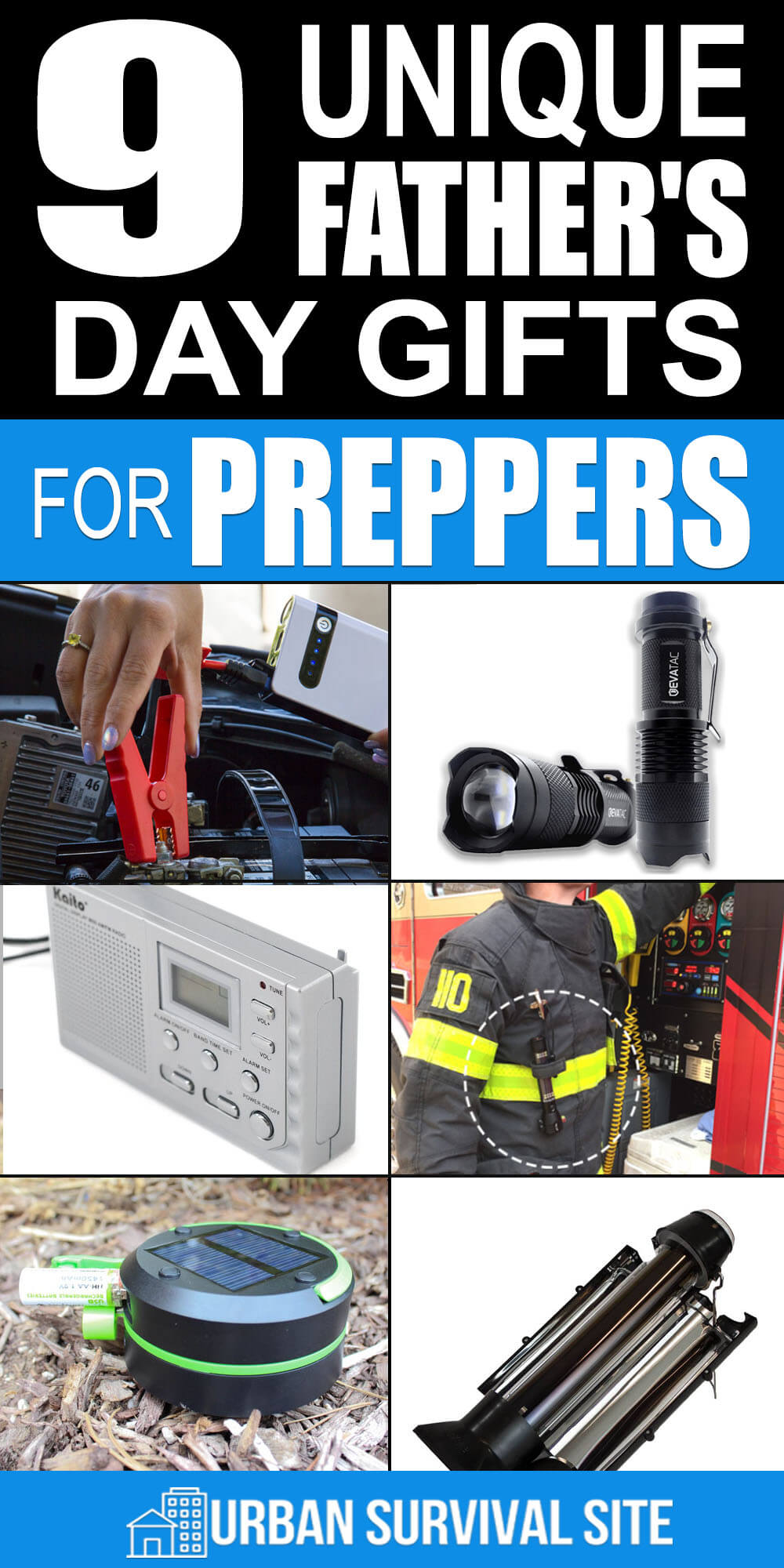 If you’re reading this article, it’s safe to say that you’ve been doing some research on the best prepper items for Fathers Day, which means you’ve no doubt seen countless recommendations for everything from knives to flashlights to fire starting materials and so forth.

All of those are okay gift ideas for Father’s Day, but let’s face it: if the guy you’re shopping for is a prepper, he probably already has those things. You need to find him some survival gear that is cool, useful, and unique–something he definitely doesn’t have. And that’s where this article comes in.

Here are some unique Father’s Day gifts for preppers (in alphabetical order):

The Battery ResQ is a power bank reserve that can be used either at home or in your car. It comes in a zip-up case and includes a set of cables will allow you to power up virtually any portable electronic device such as phones or tablets or GPS devices.

You can even use it to jumpstart your car if you have to, and the company claims it can even be used to jumpstart a small airplane. To sum up, the Battery ResQ will be a great way to keep your devices charged if you are ever cut off from a traditional power source. The EasyPower USB Battery can be plugged into anything from a USB equipped TV to a computer to a portable power bank (like the Battery ResQ that we talked about previously) to a car’s USB port and so on.

The USB Battery is designed to recharge anything and everything with a USB port when you are cut off from a power outlet. Or if you want, you can just close the top and use it as a regular AA battery.

To charge it up, just pop open the USB end of the EasyPower and locate a charger (regular or solar-powered). The Execution Torch is a flashlight that can also double as a self-defense weapon. Built out of an extremely durable aluminum body, the end of the light features a very sharp crenulated bezel that can be used to strike an attacker and deal a lot of damage.

But that’s just the beginning. The Execution Torch is also a stun gun that will knock attackers on their butts in an instant. The sound alone is intimidating. Meanwhile, the bulb of the Execution Torch will shine for over one hundred thousand hours and shines very brightly to the point that it can temporarily disorient an attacker as well.

Overall, for a flashlight that is equally as useful for everyday use as it is for defense, the Execution Torch is a great way to go. Most preppers have an emergency radio, but few of them have anything like the Kaito Pocket Radio. It is so small and light that it easily fits in your pocket.

And despite its small size, it’s a multifunctional solar and hand crank radio featuring an LED flashlight, and a cell phone charger.

It’s powered with a 5V standard USB four-way powered lantern for both casual outdoor use and for disaster situations. Finally, the Kaito Pocket Radio also features a built-in speaker and telescopic antenna, which will create excellent sound and reception. Here’s one of the most overlooked items when it comes to survival: a personal locator beacon that you bring along when going out into the woods. This way, if you ever do get lost or seriously injured, you’ll still be comforted knowing that the authorities are on their way to help you.

Take note that this item is only meant to be used in the truly worst of circumstances where one’s life could be in imminent danger. It should not be used for false alerts, or else you could face a penalty for misuse of the item.

All preppers should have this tool in their wallets. It’s basically just a hunk of metal, but its design includes:

This gift set also includes a firestarter, emergency whistle, carabiner, money clip, and a user guide. Even father’s who aren’t preppers would love a gift like this.

Another flashlight to consider is the Roadside HERO. Featuring a 2,000 mAh rechargeable battery that also doubles as a portable charger for electronic devices, the HERO can also be used to break through windows to help escape a vehicle.

It also features a seatbelt cutter to help escape as well, and the built-in power bank can be used to recharge a phone or tablet very quickly. Favored by firefighters, the Roadside HERO belongs to be in every vehicle.

Everybody needs a pen, so why not get a pen that can also be used as a flashlight, bottle opener, and window breaker as well? That’s exactly what this pen can do.

Additionally, it’s made of aircraft grade aluminum so you know it will stand the test of time. It comes with two extra refillable ink cartridges and an extra flashlight battery. Any father would love to own a pen like this.

What if there was a tool that as a pry bar, a hammer, an ax, and a nail puller all in one? That’s exactly what this is, and to top it off, it’s built right here in the United States.

The Off Grid Tools Trucker’s Friend can be used to hammer nails or hack down branches or pry loose nails or chip away at ice or pry open doors and so on. It features a fiberglass handle and a shock absorbing power grip for good ergonomics, along with a hardened carbon steel build for superior long term durability.

Hopefully, this article has provided you with some great prepper and survival gift ideas for Father’s Day.