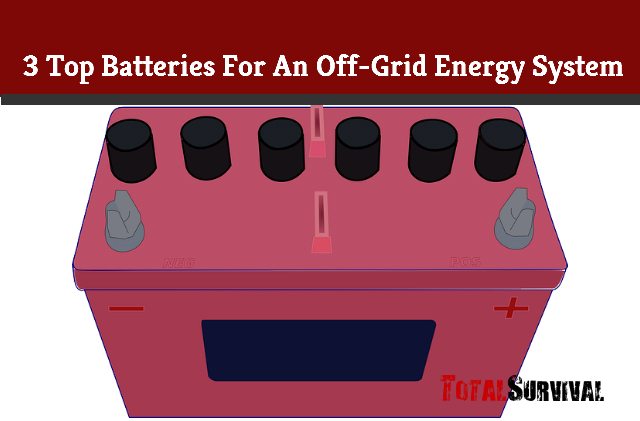 What are the best batteries for an off-grid energy system?

Because of the falling prices of renewable energy systems, more and more people are looking to use alternative energy sources as a way to: However, installing a renewable energy system, in most cases, requires you to make a considerable initial investment that you won’t get back for several years.

One of the biggest expenses associated with alternative energy systems is the batteries in the battery bank.

So choosing the correct batteries for your off-grid system is crucial (and keeping the batteries alive as long as possible is also critically important)!

You Don’t Have To Buy New Overpriced Batteries

It’s important to first note that you don’t have to buy the 3 batteries we recommend brand new.

Instead, you can use the EZ Battery Reconditioning program to:

Doing this will will save you a considerable amount of money when building a battery bank and it helps make alternative energy accessible to those with a tighter budget!

But that still leaves the questions…

What are the best batteries to use in your solar power, wind power, or other alternative energy system?

In this blog post we’ll try to answer that question in a very simple and straightforward manner.

Here’s what we’ll go over:

Lead Acid-Batteries vs. Other Battery Technologies Many of the batteries that are used in renewable energy systems were originally designed for other purposes. The most prominent example of this is the lead acid battery which has dominated the industry for a long time.

Deep cycle lead-acid batteries have proven to be one of the best (and most affordable) battery types for alternative energy system battery banks for these reasons:

The fact that they are widely produced also means that they are relatively easy to replace if a battery in your battery bank needs replacing.

The Powerball may eventually change this but at the moment deep cycle lead-acid batteries are the cheapest and most practical solution for a home battery bank.

Back when the renewable energy industry was still picking up steam, people that wanted to go completely off the grid would often have to improvise and make do with car batteries. However, car batteries were never built for this purpose and shouldn’t be continuously drained and recharged (which is what they need to do in a solar panel or wind turbine system).

Car batteries are supposed to be used only for starting and ignition. If you take a look inside one, you will see that they have a large number of thin plates.

These plates have a big total surface area that can facilitate a large number of chemical reactions. When you start your car, these reactions produce the sudden burst of power that is needed for ignition.

Deep cycle batteries on the other hand, have thick lead plates that don’t give much room for chemical reactions. Though they produce less current, they are designed to do so for a much longer period of time.

In essence, car batteries are “shallow cycle” batteries that will quickly burn out when used as storage for renewable power.

One of the reasons that some people favour SLA’s is because they require little maintenance. Unlike FLA’s that need to be checked regularly for water level, SLA’s that are used properly can be left alone.

However, sealed lead-acid batteries have two big flaws: they are sensitive and wear out quickly. So if you’re planning on using your solar panel or wind power system every day, this will eventually pose a problem.

So, here are the categories of flooded lead-acid batteries that are best for an off-the-grid power system:

So now that we know we want a lead acid battery, that’s flooded (FLA), and also has deep cycle properties …here are our 3 favorite batteries for an off-grid system’s battery bank:

Golf cart batteries are the most widely manufactured batteries on this list.

They also work great in an alternative energy system application. So it’s no surprise that they’re one of the most commonly used batteries in battery banks for renewable energy systems.

In addition, golf cart batteries can also be found almost anywhere, making them a great choice for battery banks.

If you really want to build a high quality but inexpensive battery bank one of the best options is to: A battery bank that uses one or more industrial batteries follows the opposite philosophy of a golf cart battery bank. Instead of relying on multiple strings of smaller batteries, you use a few or even one battery to store all of your energy.

Because these batteries aren’t usually manufactured to standard dimensions, you will have to have one made that is just right for your needs.

Or you can try to find an old industrial or forklift battery that’s the correct size for your system and use that.

Like golf cart batteries, there are sometimes ways to get free or cheap forklift batteries.

One way is to call up or visit industrial companies and see if they have old or “dead” forklift batteries. Offer to dispose of it for them or pay them a little bit. If they agree, you can then recondition the battery and use it instead buying a new pricey industrial battery.

But if you choose to get a new custom made battery instead, you should expect to pay quite a bit. But the good news is these types of batteries are typically built to last 15 to 20 years.

Other thing to consider are:

But if you don’t mind making a significant investment upfront (anywhere from $2,000 to $10,00) and are alright with spending time keeping your batteries in top condition, then industrial batteries might be right for you.

If you want batteries that have a little more capacity than golf cart batteries but don’t want to spend on industrial batteries, L16 batteries are a good middle ground.

The good thing with these batteries is that they last a bit longer than golf cart batteries – about six to eight years. However, they are often twice as heavy and the 6-volt models can be twice as expensive.

Different homes will have different power requirement and will need battery banks that are sized accordingly.

If you build a battery bank using any of the three batteries mentioned above, you should be able to create a battery bank that is just right for your needs.

There are some exciting new developments in the battery world for alternative energy. These new products should be entering the market over the next couple years, like the lithium ion Tesla Powerball. But at this time, our three favorite batteries for residential off-grid, alternative energy systems are golf cart batteries, L16 batteries, and industrial batteries.

And if you’re interested in saving money on your battery bank, you can use the EZ Battery Reconditioning program to learn how to:

Good luck with your battery bank! And Happy Battery Reconditioning!