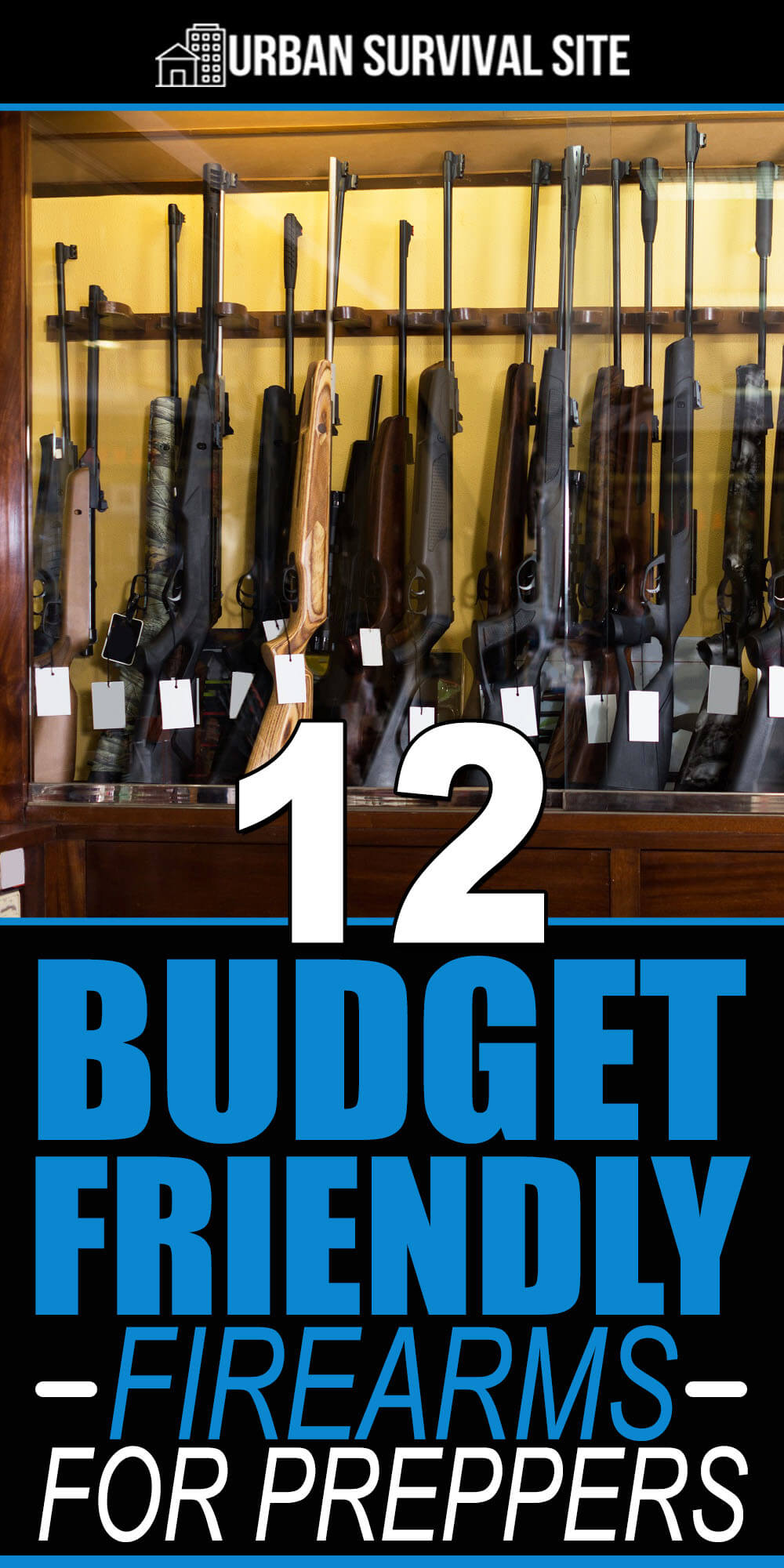 There’s a common misconception in the gun world that you have to pay a lot of money for a quality firearm. While it is absolutely true that there are many high-quality firearms at a premium price, it’s also true that in recent years, the number of quality budget firearms has gone up dramatically.

In a disaster scenario, you will need to rely on firearms for your survival, both for hunting and defensive purposes. But even if money is tight, you don’t have to spend a fortune in order to build a well-rounded armory.

In this article, we will cover twelve budget-friendly and yet high-quality firearms for preppers, divided into long guns and handguns. For each one, I also included a video where you can get a more detailed discussion of the firearm.

The 5.56 round the AR-15 fires is large enough to bring down medium sized game such as deer or pronghorn, and the AR-15 itself will be one of the best firearms to defend your home against multiple attackers.

That’s also not to mention that the AR-15, in general, is one of the most customizable firearms on the planet, rivaling the Glock, 1911, and the Ruger 10/22, which we will talk about next.

One of the most customizable firearms in existence, the Ruger 10/22 is also the most popular .22 rifle ever made. While the rifle comes standard with 10 round magazines, extended 15, 25, and 35 round magazines are also available.

The Ruger 10/22 was originally built by Ruger to be constructed to the same level of inherent quality as the hunting rifles of the time, in contrast to the cheaper builds that commonly afflicted other .22 rifles. Today, the Ruger 10/22 often sells for around $200 to $250, which makes it a very budget-friendly rifle as well.

It’s also worth noting that the .22 should not be underestimated, and it is, in fact, one of the most versatile calibers in existence. The .22 can be used for everything from defense (if necessary) to small game hunting to plinking to casual target shooting to pest control and so on.

Another great .22 LR rifle to consider is the Marlin Model 60. The main difference between the Model 60 and the 10/22 is the fact that, whereas the 10/22 accepts detachable box magazines, the Marlin Model 60 feeds rounds individually through a magazine tube that runs beneath the barrel. Standard capacity on the Model 60 is either fifteen or seventeen rounds depending on the model.

Both the Model 60 and the 10/22 are very reliable and customizable, and the one you go with is entirely based on personal preference. New Model 60s are often available for under $200.

A budget version of the Mossberg 500, the Maverick 88 is an excellent example of a $200 shotgun. Available in both 12 gauge or 20 gauge, you can also get both long and short barrels for the Maverick 88 so you can easily switch between a shotgun that can be used for both hunting and home defense, essentially giving you two shotguns in one.

The Mosin Nagant is perhaps the quintessential budget SHTF rifle. Tens of millions of Mosin Nagants flooded the surplus market when the Soviet army exchanged them for the SKS and AK-47 rifles, and at one time could be bought for less than $50 a piece in the United States. Today, most Mosin Nagant rifles will cost around $200 to $300, which still represents an excellent value.

While the Mosin Nagant is a bit crudely made, it’s also very accurate and durable, and a gun that can sustain a lot of abuse that you may put it through. That’s also not to mention that you’re buying a rifle with a lot of history behind it, as Mosin Nagants have been in continuous military service since the 1890s (and even today, they are still used by fighters in the Syrian Civil War).

One of the best examples of a budget hunting rifle is the Mossberg Patriot rifle, which often sells as a combo package with a Vortex scope for around $350. Available in both walnut and black synthetic stocks, the Patriot is available in a myraid of different rifle calibers, including .308 Winchester, .270 Winchester, and .30-06 Springfield.

The Bersa Thunder 380 is a .380 ACP double action single action concealed carry pistol that is basically a clone of the Walther PPK. Utilizing a blowback action, the pistol ships with 7 round magazines, but 8 round magazines from Mec Gar are also easily available.

The Bersa Thunder sports a safety and decocking lever on the slide much like the Beretta 92, and also ships with a key that can engage the internal safety lock for safer storage.

A copy of the Walther P99, the Canik TP9 is offered in many configurations, such as the SA and SF models. With an eighteen round magazine capacity (not counting extended magazines), the TP9 is a very reliable duty firearm.

Take note that it is a larger pistol and not the best choice for concealed carry, but as a sidearm in an SHTF situation with plenty of firepower, it’s hard to find a comparably sized budget gun that can beat it.

The SCCY CPX2 is a double action only, hammer fired compact 9mm that is routinely offered at around the $200 mark. While the SCCY does have a rather heavy trigger pull, it is still very lightweight and concealable thanks to its polymer frame and aluminum alloy receiver.

Smith & Wesson has sold over one million Shield pistols since the pistol’s launch in 2012, which should say a lot about its quality. One of the most popular concealed carry pistols today, competing with the Glock 43, the M&P Shield can easily be found for around $250.

The pistol comes with both a 7 round flush fit and 8 round extended magazine, and can be easily used for both concealed carry and personal defense.

In production since the early 1990s, the Taurus 85 is essentially a clone of the Smith & Wesson J-Frame 5 shot revolver. The current production of the 85 is available in either matte blued or stainless steel and is commonly available for around $250. Compact and lightweight, the M85 from Taurus would be a good option for concealed carry and home defense.

NOTE: An alternative to the Taurus 85 would be the Taurus 856, which is essentially a six shot version of the same gun.

Routinely offered at around $200 or less, the G2C is an updated version from the previous PT111 G2 in that it lacks the previous internal safety lock that is a common addition to many Taurus pistols.

The G2C is a mid-sized, striker fired 9mm pistol with a polymer frame and a 12+1 capacity. The weapon is small enough to be easily concealed on your person, while also large enough to get a full firing grip and defend yourself with.

The pistol also comes loaded with a number of features, including a trigger safety, frame-mounted thumb safety, aggressive texturing on the grips, restrike capability and a loaded chamber indicator.

NOTE: A 7-round single stack version of the G2C, called the G2S, is also available.

All of the above firearms are available at very reasonable prices while also offering a level of quality you can trust your life to. As with most things, it comes down to two things: 1) What you expect to use it for, and 2) Your personal preference. Take some time to decide, but don’t take too long. The shit can hit the fan at any time.