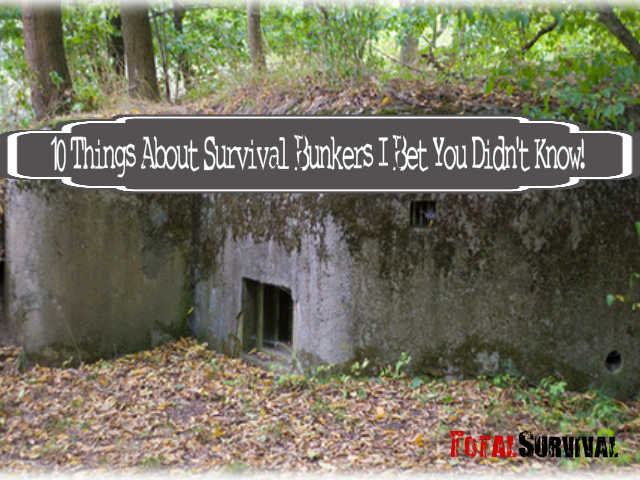 Survival bunkers are sometimes referred to as bomb shelters. These bunkers are shelters constructed of various materials that you can use to keep your family safe during a disaster.

They’re a good idea to have because you can stay protected from an attack or other dangers. Having a safe place for your family to retreat has always been a good idea and many years ago, FEMA used to have pamphlets that taught how to build shelters.

When most people envision a bunker, they automatically think of those old fall out shelters from years ago that were fairly primitive. Or they think of something like the one shown in the movie ‘Blast from the Past’ which was an underground shelter built to look exactly like the home the couple had lived in. The shelter was stocked with years’ worth of non perishables.

Survival bunkers are not anything like those old shelters but they can range from primitive, just the necessities – to luxurious accommodations that have a few thousand feet to live in. You can find some of these bunkers listed in various real estate market guides.

Some of them look like very lovely underground homes, but they can be below or above ground. They can be constructed from the freight containers hauled by 18 wheelers, built in the basement of your home or built as a stand alone in another location.

They can be made of steel or built in a silo. They can even be built into the cellar of a home. You can build whatever you like because there are no right or wrong ways to build a survival bunker as long as it can do what it’s intended to do – which is to protect your family.

Regardless of where they’re built, the purpose of these shelters is to protect your family from a natural or man made disaster or from the force of a bomb exploding. These can be fireproof and even include a gun vault room.

You need a survival bunker in the case of civil unrest, war, terrorism or government upheaval. Dangerous weather like tsunamis or hurricanes show the need for a bunker. If there is ever a nuclear bomb targeted toward the U.S., your family could safely retreat to a bunker.

You can build one yourself, work with a group to construct one or hire a professional company that specializes in building survival bunkers. The cost of the bunker will depend on what you use and who builds it.

Preparing for the worst by having a survival bunker, even if you don’t ever use it, will give you peace of mind. Make sure it’s well stocked, easy to access, yet hidden away from prying eyes, and secure to prevent others from forcing their way in.